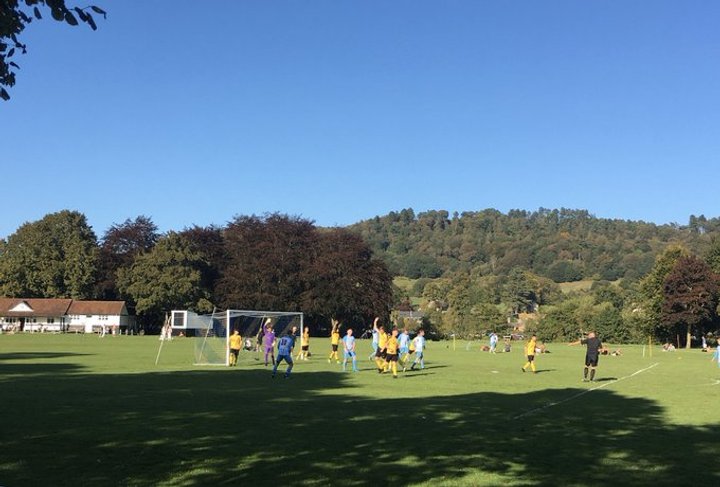 Today’s programme was dominated by the first round of the Buckingham Insurance League Cup with eight ties being completed with another five scheduled for Tuesday night.

Holbrook Sports set the ball rolling on Friday evening with a 2-0 defeat of Heanor Town reserves, Aaron Coyle with a goal just before half time and Jordan Lee adding the second on 78 minutes. Saturday’s matches saw several Division One teams getting the better of higher division opponents. Ripley Town were by no means flattered by their 4-1 win over Appleby Frodingham. An even first half saw Will Ungless-Brooks put Ripley in front three minutes before half time, and they built on this in an impressive second half performance. Joe Crossley doubled the lead on 70 minutes and sub Oliver Curran sealed the win with two goals in the space of three minutes before Mamadu Balde got one back for Frod in added time. Epworth Town Colts went through on penalties after their match with Phoenix finished 1-1 after extra time. The first 90 minutes were goalless, Ryan Douglas’s extra time goal for Epworth being wiped out by Ross Coates. It took 18 penalties to separate the teams, Epworth finally going through 7-6. Cromford and Wirksworth Town beat Thorne Colliery 3-2 after extra time with Rob Inkle and Toby Howard scoring for the hosts and Bradley Sparrow and Matthew Wilson getting the goals for Thorne in normal time, Joe Sharkey with the extra time winner . Linby Colliery had a good 2-0 win against Swanwick. A well worked goal finished off by Jack James on 42 minutes gave them the lead with 16 year old Leighton Platts getting a fine individual effort in the 78th minute to complete the win. Sherwood Colliery scored three in the first half to put out Askern. Liam West set the tone with a goal in the 2nd minute, adding a second with 14 played. Tim Gregory’s goal two minutes before the interval completed the win. A ray of sunshine at last for Mickleover RBL who beat Woodhouse Colts 4-0 to chalk up their first win of the season. Luke Thomas got a hat trick, Kai Hamilton also finding the net. A Callum Stockton double and one from Adi Parker saw Sutton Rovers home as they beat Wakefield 3-1, their reply coming from a Michael Owusu penalty.

The Black Dragon Badges North division was reduced to just two matches. Harworth Colliery shrugged off their midweek defeat by beating Crowle Colts 5-0 at Scrooby Road. They were two up in the first five minutes with Ainsley Finney and Alex Irwin with the early strikes, Leigh Warriner making it three just before half time. Irwin got his second on the hour with a Matty Bradley volley finishing the scoring ten minutes later. Staveley reserves came back from two down to take a point at Retford United. Mark West gave the hosts a 4th minute lead with Cory Goodwin doubling the advantage with just 11 minutes on the clock. James Norman reduced the deficit two minutes into the second half with Kane Snell ensuring a share of the points in the 68th minute.

Clay Cross Town were the day’s top scorers as they travelled back from Ashland Rovers in the South division with a 6-1 win. Grant Mitchell led the way with a hat trick, Josh Scully bagged two with Tom Suter also scoring, Ashland replying through Ben Jones. Holbrook St Michaels beat Arnold Town 2-0 with Josh Manning and Arron Millinchip the scorers. The other two matches produced 1-1 draws. The evergreen Pete Stubley put Blidworth Welfare in front at Underwood Villa who countered with an equaliser from Jason Gooch. Teversal Reserves shared the points with Mansfield Hosiery Mills, Gaz Atkins getting a penalty for Tevie, the Millers’ goal coming from Kian Brewin.

In the Macron Store Stoke Division One North Chesterfield Town got their first win of the season with a 4-2 defeat of Linby Colliery. The home team scorers were Lee Naughton, Isaac Godinho, Stephen Brown and Connor Roberts while Linby’s goals came from Connor Gillan and Danny Stokes. Harworth Colliery were 2-1 winners at Selston thanks to Ben Temporal and Ross Taylor, Jake Wright scoring for the home side.

Bakewell Town retained their 100% record in Division One South, edging out Holbrook St Michaels 3-2 thanks to Jonathan Richardson, Ben Rach and Tom Forder. Mickleover Sports also have maximum points which they maintained with a 5-1 win against Sports Gateway. Jack Walsh (2), Marcus Calderone, Tadeus Madej and Keir Sheppard scored for Mickleover with Volkan Olgun replying for Sports Gateway. Lucas Brough was the matchwinner for Wirksworth Ivanhoe with the only goal of their game with FC Sez.

There was an all North Division tie in the Sheffield and Hallamshire FA Senior Cup as Renishaw Rangers got the better of AFC Bentley by five goals to two. A hat trick from Rod-Orlando Young was the inspiration for Renishaw, for whom Jem Akpinar and Callum Featherstone also scored, Danny Porteous getting both for Bentley.

 The Saturday Roundup - September 28th All the action from a busy afternoon in the Central Midlands.

Midweek Roundup for September 18th  A roundup of the midweek matches in the Central Midlands.