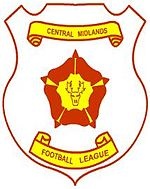 All the action from a busy afternoon in the Central Midlands.

Central Midlands League roundup for September 28th
Rowsley 86 must be wondering how on earth they left Clay Cross empty-handed after they were the victims of a smash and grab raid by the home side in Friday night’s Black Dragon Badges South Division match. After going behind on 24 minutes to a Josh Parfitt goal, Rowsley equalised through Shomari Doyle’s snapshot in the 35th minute, but were reduced to ten men three minutes later. Despite this, Noah Evans put them ahead with 53 played, before the hosts struck late, Josh Scully levelling seven minutes before the end then converting a stoppage time penalty to take the points. Pinxton moved up to third after a 5-1 defeat of Holbrook St Michaels with the goals coming from John Fones (2), Tom Ellis, Brad Foley and Dan Riley.

Arnold Town led twice but finally went down 4-2 at home to Blidworth Welfare. Andy Start gave Arnold a 25th minute lead, Tom Sharpe levelling on 32 only for Matt Fowler to add the home side’s second five minutes before the break. Paul Revuelta equalised for the second time on 53, Kai Wilson putting Blidworth in front for the first time midway through the half before Revuelta got his tenth goal of the season two minutes from the end. Swanwick had a comfortable 5-0 win over Hilton Harriers. Zak Melrose scored twice with Ashley Buxton, Daniel Ball and Chris Turner also finding the net. Mansfield Hosiery Mills and Linby Colliery shared the points in a goalless draw, while it was also a point apiece at Bracken Park where Underwood Villa and Ashland Rovers drew 2-2. George Wilkinson got both for Villa, Ashland’s goals scored by Hayden Wharmby and Lee Townsend.

North division leaders Newark Town were seven goals to the good by half time against bottom markers Sutton Rovers. Lewis Chambers set the ball rolling in the third minute and this was followed by goals from James Evans, Chambers with his second, Kieran Job, Ben Castell and Steve Carty, Chambers completing his hat trick on 40 minutes. To their credit Sutton never gave up and after Carty had added a penalty on the hour, Callum Stockton pulled two goals back to make the final score 8-2. Dinnington Town kept up the pressure on the leaders with an impressive 3-0 win at Staveley Reserves, the goals coming from Jordan Levitt with two and Joseph Bedford giving Dinnington their seventh consecutive clean sheet in league games. Collingham and Retford United finished all square at Station Road, the match ending 3-3. Collingham led with a Rhys Stanley goal in the third minute, but two minutes later Retford were level through Jack Varley. Brandon Kane put the visitors ahead with a quarter of an hour played but Mark Sinclair equalised on 29 minutes. An own goal saw Retford go in front for a second time, but Matt Ward rescued a point for Collingham with a penalty six minutes from time. Another side to suffer in first half were Phoenix who conceded four to Renishaw Rangers and were reduced to ten men before eventually going down 5-2. Ryan Bates scored two for Rangers with Ben Copestake, Jem Akpinar and a Craig Purcell penalty making it five before Keegan Hepplestone replied with goals on 59 and 62 minutes to give the scoreline some respectability. An own goal in the 57th minute decided Askern’s home game with Dronfield Reserves in favour of the hosts, while Crowle Colts took maximum points for the first time since the opening game of the season with a 5-2 win over Thorne Colliery. Tom Finnigan with two, Joe Simpson, Zak Shipman and an own goal saw Crowle home with Kirk Frost scoring both for Thorne.

There was one tie in the Buckingham Insurance League Cup, AFC Bentley going through 4-1 after extra time against St Josephs Rockware of Worksop. Danny Porteous (52 minutes) for Bentley and Daniel Scott for St Josephs took the tie to extra time where Bentley added further goals from Paul Sherburn and two from Theo Mozart, probably the most composed player on the field!.

Mickleover Sports made it five from five in the Macron Store Stoke Division One South as they ran up the goals in an 8-2 defeat of Holbrook Sports. There was a hat trick from Kyle Clarke, doubles for Lewis Belgrave and Fin Davies and one from Jack Thatcher. Bakewell Town kept up their 100% record by beating Borrowash Victoria 6-3. Jonathan Hutchinson got a hat trick, Tom Forder, Aaron Maund and Stuart Baker also scoring, while Vics’ scorers were Tyler Stevenson with two and Taylor Smith. Ripley Town followed up their cup win last week with a 3-1 win against Heanor Town, the goalscorers were William Ungless-Brooks, Joe Crossley and an own goal.

The Mansfield Lodge Hotel Division One Cup got underway with four first round ties. Aaron Taylor and Toby Howard saw Cromford and Wirksworth Town through 2-0 against Harworth Colliery While Long Eaton Community put five past Chesterfield Town without reply. Scorers for Long Eaton were Josh Lawe with two, Benedict Wilson, James Taylor and Patryk Goral. Wirksworth Ivanhoe came from two goals down at Linby Colliery to win 4-2. Travis Shooter put Linby two up before Ivanhoe rallied through Lewis Higton, Dan Watson, Matt Leask and Matt Dranfield. In the other tie Wakefield won 3-2 at Retford United thanks to a hat trick from Mohammed Hamid, with Brandon Ashmore and Muhamet Gashi replying for Retford.

Three of our sides came through the opening round of the Notts FA Senior Trophy. Nottingham put out fellow CML side Woodhouse Colts 4-1 thanks to a hat trick from Blaze Hall and one from Ayleal Dill, Jamie Royle with a goal for the visitors. FC Sez were 5-0 winners at Bridgford United, their scorers were Sam McElroy (2), Emmet Edwards, Dominic Brown and Asher Phythian. Selston put out Bingham Town Reserves 4-1 with Tim Moore scoring twice and Harrison Mills and Korben Spier getting one apiece.