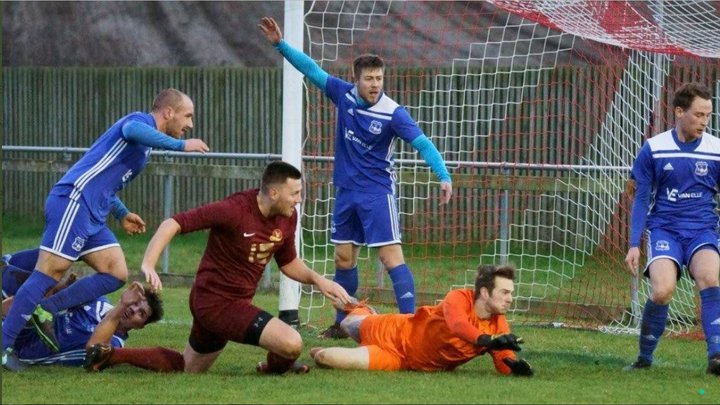 After six weeks of postponements we finally had an almost full set of matches this afternoon as the weather finally behaved.

With the top two in the Black Dragon Badges North Division idle, third placed Harworth Colliery had the opportunity to take advantage but were only able to share the points in a closely fought 2-2 draw with Renishaw Rangers. Alex Irwin scored both for Harworth with Owen Ryan and Montelle Kamara the scorers for Rangers. With their pitch still underwater, AFC Bentley moved their match with Phoenix to the 4G pitch at the Keepmoat Stadium. It was obviously to their liking as they ran out 3-0 winners. Theo Mowatt scored the opener on 14 minutes, Michael Attard added a second three minutes into the second half with Josh Street rounding off the scoring in the 68th minute. Retford United had their match at bottom markers Appleby Frodingham sewn up by the half hour as Mark West scored in the 11th and 22nd minutes and Zach Casburn got number three on 29. The Badgers had to wait until three minutes from time for the final goal as West completed his hat trick from the penalty spot. Askern drew a blank for the fourth game running as they went down 3-0 at home to Crowle Colts, the Lincolnshire side’s goals coming from Tom Finnegan (2) and Ryan Bonser. Thorne Colliery were 2-1 winners against Sutton Rovers thanks to a first half goal from Kirk Frost and a late Nick Howcroft strike after Sutton had drawn level through Ellis Pattison.

An improving Arnold Town gained an impressive point in a 1-1 draw with Pinxton in the South Division. In an even first half James Allen gave them the lead two minutes before half time. Daniel Minto equalised on 70 minutes, both sides going close in the final stages in an entertaining match. Sherwood Colliery are this week’s leaders after deepening the gloom at Blidworth Welfare with a 7-1 win. The Wood led by four clear goals at half time with two goals from Gaz Curtis and one each for Liam West and Tim Gregory. Tristan Burrell added to the total four minutes after the restart before West’s second and Curtis’s hat trick goal three minutes from the end. The only bright spot for Blidworth came from a Tony Edwards consolation goal. Clay Cross recovered from last Saturday’s defeat with a 5-0 victory against Hilton Harriers. The Millers started with a rush, scoring three in the first ten minutes, Jordan Hendley twice and Josh Parfitt finding the Harriers’ net. Parfitt got his second on 54 minutes with Billy Whitehead’s 80th minute strike sealing the win. Linby Colliery extended their unbeaten run to six matches and moved into fourth place with a 5-2 win at Ashland Rovers. Owen Everton (2), Jack James, Tom Hilton and Lance Cunningham were on target for Linby with Lee Townsend and Hayden Wharmby replying for Ashland. Mickleover RBL had a better afternoon as they climbed off the foot of the table after beating Teversal 3-0 with Charlie Harrison, Kai Thomas and Connor Golden the scorers.

In the Macron Store Stoke Division One North, Nottingham played their first league match for two months and resumed their campaign with a bang as they inflicted a 6-1 defeat on Chesterfield Town with Ayleal Dill and Seke Spence each grabbing two, Rico Spencer and Ryan Grace also on the scoresheet. Solly Limb was Chesterfield's scorer. Epworth Town went down to their first league defeat, going down 2-1 at Linby Colliery for whom Travis Shooter scored twice. Boynton Sports saw off Nottingham Education 2-0 thanks to goals from Ryan Poole and Jack Waddle. Wakefield picked up their first league point of the season in a 3-3 draw with Retford United. Goalscorers for Wakefield were Mason Smith, Amos Kabeya and Alagi- Baharu Jabbi while Brandon Ashmore scored two for Retford, the other an own goal.

A goal packed game in Division One South resulted in 4-4 draw between Woodhouse Colts and Wirksworth Ivanhoe, the goals coming from Jay Straw (2), Kyle Chadburn and Wez O’Rourke for Woodhouse with Wirksworth replying through Lucas Brough who got two, Ryan Marchington and Tom Paine. The other match had just one goal, Jack Madin scoring to give Bakewell Town the points in their game with Ripley Town.

One of the two scheduled Buckingham Insurance League Cup ties went ahead, Rowsley 86 winning 2-0 at Holbrook St Michaels with goals from an Andy Roome penalty and Adam Kay.

The Derbyshire Divisional Cup has occupied some teams for a succession of Saturdays. In the North competition Cromford & Wirksworth Town reached the semi-finals by beating Dronfield Town Reserves 3-1. All the goals came in the first half, Lewis Land, Rob Inckle and Dec Jenkins got the goals for the home side, James Savage with one for Dronfield. An all CML tie in the southern half of the competition saw Mickleover Sports go through by defeating Long Eaton Community 3-2, their goals scored by Tomas Junek who got two and Elijah Luka. Heanor Town went down 2-1 at MRA side Willington. After going a goal down, Kieran Smith equalised after half an hour. A missed 83rd minute penalty cost Heanor dear as Willington snatched the winner two minutes from time.

 The Saturday Roundup - December 14th All the News, Results and (most of) the scorers from this afternoon's matches