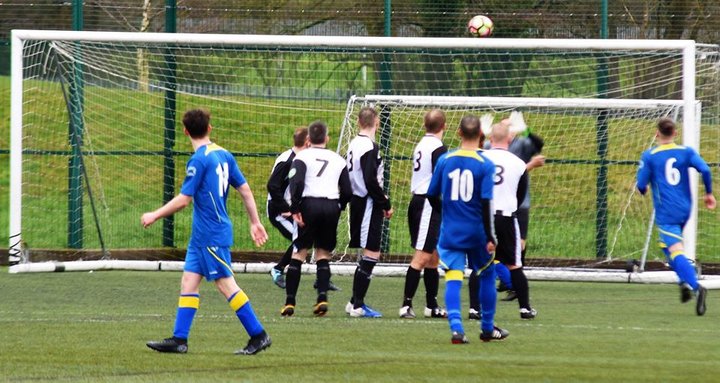 A brief roundup of what was left of this afternoon's matches

Photo of Swanwick's 11-0 win over Willington this afternoon courtesy of DC Live Photography. Thanks Darren

Storm Denis howled through the fixture list this afternoon, but six matches escaped, the majority thanks to 3G pitches.

Only one match was played in the top two divisions with, in the north division, Sutton Rovers and Staveley Reserves sharing the points in a 1-1 draw at Manor Way. Both goals arrived midway through the second half, Reece Clegg putting Staveley ahead on 62 minutes only for Callum Stockton to get the equaliser two minutes later.

There were two games each in Division One North and South, three of which ended in draws. In the north leaders St Joseph’s Rockware dropped points for only the second time this season as they drew 2-2 with Nottingham FC, whose goals came from Blaize Hall and Mo Sillah with Ben Brown and Chris Lovett on target for St Josephs. It was the same scoreline in the other game as Boynton Sports shared the points with Selston. Scorers for Boynton were Lee Betts and Rowan Hill, Gareth Mason getting both goals for Selston.

Mickleover Sports took over at the top of Division One South following an 8-0 defeat of bottom club Borrowash Victoria. Josh Satchwell and Jiri Boula each scored twice with the other goals shared between Lewis Belgrave, Fin Baker, Surafei Tefera and Tomas Junek. Holbrook St Michaels and Heanor Town finished level at 1-1 with Joe Cluskey on target for Holbrook and Kieron Smith replying for Heanor.

The final of the Derbyshire FA Divisional Cup South will be an all CML affair as Swanwick at last got their semi=final against Willington out of the way. The match was rather one-sided, Swanwick hammering their opponents 11-0. Gur Wilding led the way with four goals, Zak Melrose, Henry Brooks and Chris Turner added two apiece, Shane Buckerfield also finding the net. Swanwick will now meet Mickleover Sports reserves at Long Eaton on April 1st.
Richard Lane

 The Saturday Roundup - February 22nd Once again the weather was the winner, here's a roundup of what was played