The Saturday Roundup for February 1st 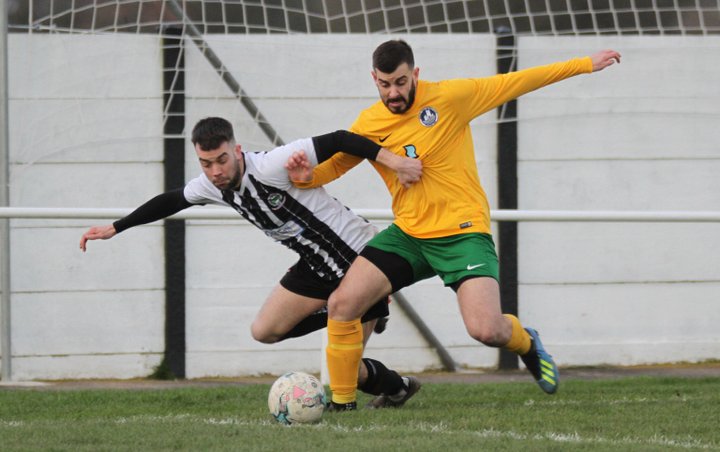 A roundup of a busy afternoon in the Central Midlands League

If it’s not rain or frost then it must be wind, though the conditions this week allowed all but three of the scheduled fixtures to go ahead.

The stand-out match in the Black Dragon Badges North Division attracted a crowd of 231 to see leaders Newark Town visit form team Retford United. The teams have scored 120 league goals between them this season, so predictably the game ended in a goalless draw, the fourth draw between the teams this season, Newark seeing a penalty saved on 32 minutes. Dinnington Town took advantage of the result to nibble a bit more off Newark’s lead as they had a narrow 3-2 win against Thorne Colliery. On target for Dinnington were Brad Hanson, Mason Barlow and Dan Cain, Shay Evans-Booth getting both goals for Thorne. Harworth Colliery’s match with Staveley Reserves was abandoned after 27 minutes following a serious injury to Harworth’s Ashley McEwan to whom best wishes are sent for a full recovery. Sutton Rovers’ Callum Stockton was the day’s individual top scorer, grabbing four of his side’s goals in a 7-0 hammering of Appleby Frodingham. Stockton’s first two came on 30 and 32 minutes, his hat trick arriving in the 53rd minute. Mitch Wain got the fourth five minutes later before the last three came in the final ten minutes from Stockton, Tom Doherty and Danny Parkes. Most of the action in Collingham’s 4-0 win over Askern came in a second half in which all the goals were scored. Tobi Mayhall got the first two on 55 and 61 minutes, Chris Self added a third with 76 played, Danny Walters rounding things off in the last minute. Phoenix were 4-1 winners at home to AFC Bentley. Ross Coates opened the scoring in the 10th minute, Adam Houghton adding a penalty ten minutes later. Marcus Edwards goal on 33 minutes reduced the arrears but second half strikes from Houghton and Kieran Sykes Tobin secured the points. After a difficult week off the field, Renishaw Rangers fell to a narrow 2-1 home defeat at the hands of Crowle Colts. Thomas Galley scored for the hosts with Tom Baker and Ryan Bonser shading it for Crowle.

With the top of the table clash between Clay Cross and Sherwood Colliery Reserves called off, the main interest in the South Division was focused on the teams in the chasing pack. Pinxton did their chances no harm with a 4-1 defeat of Holbrook Sports. Daniel Minto gave them a 10th minute lead, Joe Riley doubling the score on the stroke of half time. Sion Green got Pinxton’s third with 62 played, Mark Whitton getting one back for Holbrook with ten minutes to play. The home side had the last word, Dan Riley scoring in the final minutes. Linby Colliery failed to make the most of their chances in a goalless draw with Mickleover RBL. Rowsley 86 consolidated fifth spot with a 2-0 win at Hilton Harriers, Andrew Roome and Adam Kay their matchwinners. Blidworth Welfare got their first win in 2020, beating Holbrook St Michaels 2-1. Paul Revuelta’s opener was chalked off by Frazer Hallam, but Tony Edwards made sure the points travelled back to Blidworth. Mansfield Hosiery Mills and Underwood villa shared the points in a 2-2 draw at the Fieldings. The Millers went two goals up thanks to Kian Brewin and Tom Batterham but Villa struck back to take point thanks to George Cooper and Troy Carty.

St Josephs Rockware opened up a six point gap at the top of the Macron Store Stoke Division One North as they beat their nearest rivals Boynton Sports 4-0. St Josephs maintained their unbeaten run with goals from Gaz Bonner, Jack Hardy, Dan Wiltshire and Reece Twell, keeper Adam Beard ensuring a clean sheet by saving a penalty. Nottingham move past Boynton to second plage after a 6-1 win against Linby Colliery. Rico Spencer scored twice and there was one each for Tarell Peck, Nick Murray, Kailum Richards and Mo Sillah. Harworth Colliery recorded their sixth successive win as they travelled to Wakefield and won 5-1, Lee Naughton (2), Aaron Pickersgill, Elliott Allsop and Tom Pick with the goals.

Long Eaton Community top the Division One South table after winning 4-1 at Borrowash Victoria, Josh Lawe with two, the others from Reece Widdowson and Bartosz Korzeniewski. Mickleover Sports followed up their midweek defeat of Cromford and Wirksworth Town by beating Woodhouse Colts 7-2. Among the goals for Sports were Brodie Carter with two, Tomas Junek, George Williamson, Josh Satchwell, Kyle Clarke and Lewis Belgrave. Wez O’Rourke and Jamie Royle replied for Woodhouse. FC Sez’s reliable scoring duo of Dec Smith and Sam McElroy were on form again in their side’s 4-2 success against Ripley Town, Smith’s double and McElroy’s one being backed up by Asher Phythian with Jack Brown and Adam Busuttil responsible for Ripley’s reply. Wirksworth Ivanhoe stayed in touch at the top, Kyle Higton and Matt Leask their scorers as they won 2-0 at home to Bakewell Town.
In the Steel Beams Derby Presidents Cup, Epworth Town Colts took on Holbrook St Michaels, winning 3-0 thanks to a double from Ritchie Burdett and one for Gary Moment.

Congratulations to Cromford and Wirksworth Town who reached the final of the Derbyshire FA Divisional Cup North after winning their semi final 4-2 against Bamford. The winning goals came from Josh Middleton with two, Tom Savage and Rob Inckle. They will now face Whaley Bridge athletic in the final.