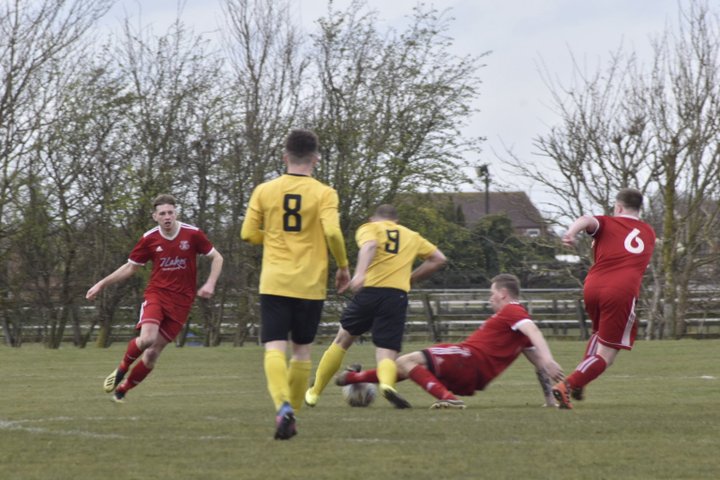 All the action from the afternoon's matches.

The weather (and other factors) were to blame for another restricted fixture list this afternoon.

The Black Dragon Badges South division was reduced to just two matches, one of which may prove significant when and if the season comes to an end. Current leaders Sherwood Colliery reserves entertained third placed Pinxton and suffered only their second defeat of the season, going down 3-2. Sherwood took the lead through James Vickers but John Fones brought Pinxton level before half time. Perry Marriott and Joe Fox put the visitors ahead before Olly Ashton got a second for the Wood. The other fixture saw Rowsley 86 extend their unbeaten run to seven with a 2-1 win at Teversal reserves. Noah Evans and Andrew Roome were the matchwinners for Rowsley, Craig Newton getting one for Tevie.

Goals at the beginning and the end of their matches saw unbeaten top two Newark Town and Dinnington Town pull off 1-0 wins in the North division. Newark struck early in their match at Thorne Colliery, Jammy Lloyd’s third minute goal taking the points in a wind-affected game. Dinnington left it until the final minutes to get the win at Crowle Colts, Mason Barlow the scorer. Retford United produced a strong second half performance to deepen the gloom at Appleby Frodingham the game ending 8-1 to the Notts side. There was only one goal in it at the interval, Mark West scoring in the 10th and 36th minutes before Ollie Craig pulled one back for Frod just before the break. Retford stepped up a gear or two in the second half, West taking his tally to four, with Tom Brook, Igor Mlynarski, Corey Goodwin and Alex Bartholomew also finding the net. Staveley reserves made it three wins in seven days, returning home from Phoenix on the right end of a 3-1 scoreline. Reece Clegg with two and Jake Gascoigne saw them home, the goal for Phoenix coming from Lucas Corbett. It was the same score at Dronfield where the home side beat Sutton Rovers, who were handicapped by an early red card for a handling offence. Greg Mason’s 10th minute goal put the hosts in front, Danny Parkes levelling three minutes later. Laurie Wilson gave Dronfield the lead just before the break with Tom Fairweather making sure of the points in the 78th minute.

In Division One North, St Josephs Rockware are now twelve points clear at the top after a 2-0 win at Wakefield thanks to goals from Ben Brown and Chris Lovett. It took an injury time goal from Alex Paterson to settle Linby Colliery’s match with Chesterfield Town in the home side’s favour 3-2. Harry Brown and Josh Leonhardt got the goals for Chesterfield with Toby Birch and Jack Marsden Linby’s other scorers. Epworth Town Colts also won 3-2 against Harworth Colliery, Epworth scoring through Harrison Coley, Ritchie Burdett and Ammar Abbas, Harworth replying through Lee Naughton and Tom Pick, the match attracting an attendance of over 100. The battle of the basement saw Nottingham Education swap places with Selston after a 4-0 win at Melbourne Park. Hemin Mahmoodi got two of the goals, the others scored by Mak Jelenski and Asuenimhen.

Wirksworth Ivanhoe stayed in touch with the top of the Division One South table after a 5-1 win over Ripley Town. Jack Higton, George Frost-Gilbert, Daniel Bunting, Regan Furness and Dean Higton were among the goals for the winners. Holbook Sports switched their match with Cromford & Wirksworth Town to Cromford, but went down 3-0 to goals from Josh Middleton, Toby Howard and Joe Sharkey. The other two matches finished all square, Rueban Nwadike scoring Holbrook St Michaels’ goal as they drew 1-1 with FC Sez, while Baillie Hajman’s goal for Woodhouse Colts was wiped out by Bakewell Town’s Matt Kelcey in another 1-1 draw.