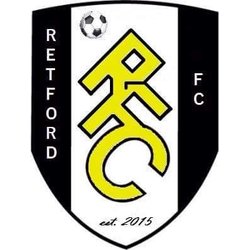 Retford FC was formed in 2015 by Chris Woodhead & Kev Swannack, former managers of Retford Utd u19/21.

The club was set up to give local players from the area chance to progress from youth football into the senior game at a decent level and hopefully progress further up the pyramid .

The club ground shared with Retford United for the first two seasons before moving to their own ground THE RAIL at the end of the 2016/17 season which they will develop over the coming seasons .