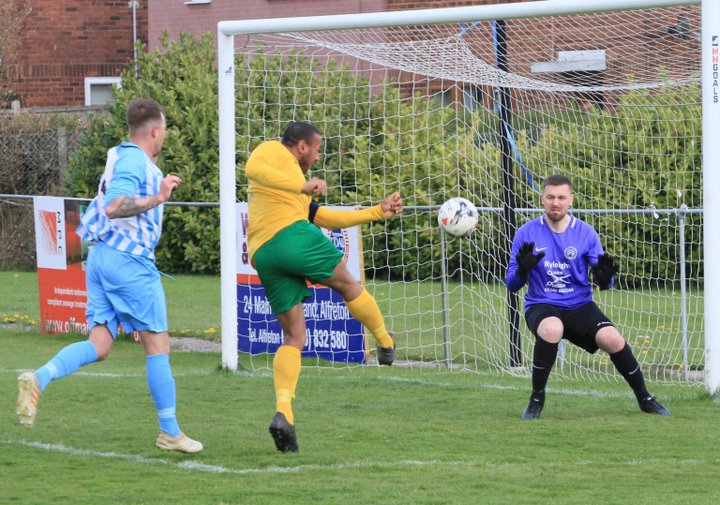 AS the season approaches its climax, here are this week's results and scorers.

Mickleover RBL will contest the final of the Buckingham Insurance League Cup with Linby Colliery at Alfreton on May 1st after a 3-1 win against Harworth Colliery at South Normanton on Tuesday night. All four goals came in the first half, Owen Brader with the first of the Legion’s goals on 14 minutes, Bayley Lowe equalising ten minutes later. The scores weren’t level for long as Lee Hillier restored Mickleover’s lead four minutes later, Jordan Lee getting their third on the half hour. Harworth then had a penalty saved in the 34 minutes. The second half proving goalless.

Blidworth Welfare will qualify for promotion from the Premier South division as they ran in seven goals against Nottingham FC who scored two in reply. A first half hat trick from Adi Harris laid the foundations, Lee Townsend also getting three with Eugene Francis adding one. Mohammed Sillah got both for Nottingham. A depleted Linby Colliery subsided in the second half to a 5-1 Home defeat at the hands of Mansfield Hosiery Mills. Josh Melville gave Linby an interval lead but the Millers dominated the second half, Elliott Nunn scoring twice, Joe Osborne, Isaac Godinho and Matt Dickerson all adding to the score. Pinxton’s dismal end to the season continued as they lost 3-0 at home to Sherwood Colliery Reserves, Liam West (2) and Ivo Radzivilovics the scorers. Possibly the best turnaround of the season was at Hilton on Wednesday where the Harriers came back from three down to Rowsley 86 to pull off a 7-4 win. Rowsley were three up in the first half hour, Logan Liggins, Adam Cahill and Scott Taylor giving them what appeared to be a comfortable lead. Three goals in a five minute spell levelled the scores by half time, two from Jack Thatcher, one for Scott Abbey, Hilton’s comeback continued after the break, Abbey completing his hat trick and Thatcher taking his total to four with Andy Roome getting Rowsley’s fourth.

Clay Cross recorded a second successive 1-0 win, this time against Crowle Colts, the deciding goal coming midway through the second half from Lewis Macaskill. Sheffield Reserves got their first win in ten as they beat AFC Bentley 3-1. Jamie Bonsor opened the scoring in the 22nd minute, Demitrius Timms getting a second ten minutes later. Kallum Dury made the game safe with a 67th minute strike, Luke Flanagan getting a consolation for Bentley three minutes from time. The highest league crowd of the season, 311, saw Newark Town draw 1-1 with Retford United, a result which did nothing to resolve the log jam at the top of the Premier North division. The goals came early with Ainsley Finney’s 9th minute goal for the home side chalked off by Mark West three minutes later. Collingham were 2-0 winners at home to Kiveton Miners Welfare, Dan Evans scoring in the first half, Fraser Kirk in the second. Glapwell won 3-1 at home to Dinnington on Thursday. They hit the ground running, Logan Liggins scoring on 3 minutes, Ben Copestake on seven. After the home side had missed a penalty, Dinnington scored one through Brandon Ashmore on 41 minutes before Copestake got Glapwell’s third two minutes later.

SATURDAY’S MATCHES
Newark Town improved their chances of finishing at the top of the pile in the Premier North division, a single Lewis Chambers goal after an hour taking the points at closest rivals Clay Cross. Retford United won their penultimate game, a local derby at SJR Worksop, by three goals to nil. All three goals came in the second half, Oliver Fieldsend getting the first five minutes after the break, Mark West adding a penalty ten minutes later, Dean Conway scoring the third two minutes from time. Long time leaders Thorne Colliery were held to a 1-1 draw at Glapwell, Andy Walkden’s 5th minute goal for Thorne chalked off by Logan Liggins’ 22nd minute equaliser. None of the four contenders have an easy end to the season, the destination of the title still in the balance. Kiveton Miners Welfare had a 2-1 win against Sutton Rovers. Jordan Willis put Kiveton in front with a 30 yard strike in the 15th minute, a lead which was held until 74 minutes when Adi Parker got the equaliser, the winner coming ten minutes later from Liam O’Brien. Sheffield Reserves won 2-0 at Staveley Reserves, Riley Noble scoring in the first half, Callum Dury in the second, Ewan Oxborough saving a Staveley penalty. Crowle Colts travelled to Dearne & District, returning home with a 3-1 win under their belts. Kurt Robinson got them off to a good start, netting on 17 and 22 minutes, Sam Goodhand extending the lead with 71 played before Alex Lill got one for Dearne eight minutes before the end.

Blidworth Welfare are the champions of the Premier South division, sealing it with a win at Long Eaton Community while their only challengers Mickleover Reserves went down at Hilton Harriers. Both matches ended 2-1, Blidworth winning with goals from Luke Bacon and Adi Harris, Long Eaton’s reply coming from Riley Phillips. The match was marred by a serious injury for Harris, to whom we send wishes for a full and speedy recovery. At Hilton, the “Cider Bys" Nax Bulmer and Jack Thatcher scoring in a 2-1 win against Mickleover. Bulmer’s 2nd minute goal gave his team the perfect start, and although Devon Smith equalised in the 72nd minute, Thatcher hit the winner five minutes later. Mickleover RBL had a comprehensive 6-0 win over Mansfield Hosiery Mills, Matt Green scoring twice, the other goals coming from Lee Hillier, Liam Oliver, Lewis Durow and Owen Brader. Holbrook St Michaels won 3-0 at Wirksworth Ivanhoe, Jorge Knowles, Regan Bickerton and Dylan Garnett the scorers. In the other two games the points were shared. Goals at either end of the game at Debdale Park saw Sherwood Colliery Reserves 4th minute goal from Luke Davis equalised in stoppage time at the end by Teversal Reserves’ Blake Vincent. Travis Shooter put Linby Colliery ahead in the first half at Rowsley, who fought back with goals from Conor Hiley and Aaron O’Neill, Danny Stokes getting a late equaliser for Linby.

The finalists of Thursday’s Division One Cup Final were both knocked out of the Presidents Cup at the semi final stage. Bakewell Town were beaten at home 3-2 by Melbourne Dynamo whose scorers were Jack Goodband, Ben Cooke with his 30th of the season and Matt Jones, Aaron Maund getting both for Bakewell. Derby Singh Brothers also lost at home, going down 2-1 to Bessacarr. Ronin Herrington and Henry Tyers won it for the Doncaster side, Bhupinder Aletan with the goal for Singh’s.

There was one match in each of the Macron Store Nottingham Division One sections. In the North Division Harworth Colliery defeated 780 JLC 6-1. Adam Morrison and Henry Alton getting two each, Michael Wibberley and Ryan Dickinson with one apiece, Christian Worboys scoring for the visitors. The South section match at Linby went the way of PMG Academy for whom Dembo Jatta got all three goals in a 3-2 win, two of them from the penalty spot, Jack Harrison and Joe Humphreys on target for the hosts. The Central Division game featured Holbrook St Michaels and Kilburn who won 3-2 with two Jordan Mighty goals and one for Jack Archer, Will Welch and Bart Banks replying for Holbrook.

Central Midlands - Upcoming Cup Finals  Details of the three Cup Finals over the next fortnight.