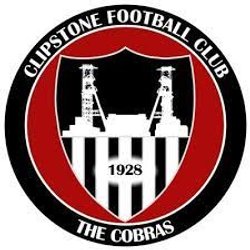 The club was established in 1928 as Clipstone Combine, playing in the Colliery Alliance League. They were later renamed Clipstone Boys Brigade before becoming Clipstone Welfare when they started playing in the Mansfield & District League. The club later joined the Sutton & Skegby League and then the Nottingham Spartan League, which they won in 1955–56, alongside the League Cup and Notts Intermediate Cup.
Clipstone subsequently joined the Notts Alliance, winning both the Senior Division and the League Cup in three successive seasons between 1972–73 and 1974–75. In 1985–86 the club won the Notts Senior Cup. The club won back-to-back league titles in 1992–93 and 1993–94,[3] also winning the League Cup and the Notts Senior Cup in the latter season. They moved up to the Premier Division of the Central Midland League in 1994 and won the division at the first attempt, but were denied promotion due to their ground failing to meet league requirements. After winning Division One again in 1996–97, and having made the necessary ground improvements, the club were promoted to the Supreme Division.[2] In 2006–07 they won the league's Floodlit Cup, beating Barton Town Old Boys 3–1 in the final.[2] The club remained in the Supreme Division until league reorganisation in 2011 saw them placed in the Northern Division.
After a fourth-place finish in the North Division in 2011–12, Clipstone were accepted into Division One of the Northern Counties East League. The club adopted its current name in 2013, and were Division One champions in 2014–15, earning promotion to the Premier Division. They finished bottom of the Premier Division in 2017–18 and were relegated to the East Midlands Counties League. At the end of the 2020–21 season the East Midlands Counties League was dissolved and the club were transferred to Division One of the Northern Counties East League