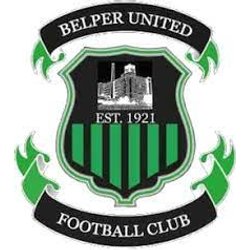 A Belper United was established in the 1921. By the early 1980s the club was playing in the East Midlands Regional League. This became the Midlands Regional Alliance in 1985, and Belper were its first Premier Division champions in 1985–86. They won the league's Challenge Cup in 1992–93, before securing a second Premier Division title in 1994–95 and another Challenge Cup the following season. They were later relegated to Division One, which they won in the 2004–05 season to earn promotion back to the Premier Division.
Despite finishing bottom of the Premier Division in 2008–09, Belper were not relegated to Division One. In 2010 they switched to the South Division of the Central Midlands League. In 2014–15 they won the Central Midlands League Floodlight Cup, beating Clay Cross Town 3–2 in the final. After finishing as runners-up in the South Division in 2015–16, the club were promoted to the East Midlands Counties League. They remained members of the league until it was disbanded at the end of the 2020–21 season, at which point they were transferred to Division One of the United Counties League.