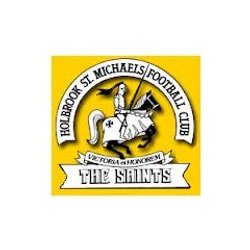 There has been a football team in Holbrook village at least since the early part of the last century. Local newspaper records show that a team called Holbrook Swifts was successful in cup and league competitions around 1910 - 1912. It is believed that in 1912 this team changed its name to Holbrook Saint Michaels. What is known for sure (we still have the minutes book) it that in early 1932 the local vicar, The Reverend Sides formed a team named after the village church of Saint Michael, to play in the Belper Sunday School League.

We moved to our present ground, Holbrook Park in 1936 and, apart from a short period during the Second World War, we have played continually since winning cup and league competitions. We have had many successes over the years most notably being the only club to win the Derbyshire Divisional Cup Northern section (1975 & 1983) and the Southern section (2006).The Club has progressed through the local leagues: The Belper Amateur League, The Derbyshire Welfare League, The Derby Senior league, The Central Alliance and latterly the Midland Regional Alliance where the Club was the longest serving member. The Club has always endeavoured to be a village team that follows its motto ‘victory with honour’. Our junior section consists of 2 teams competing in the Derby City league

For season 2021/22 Steve Palombo, first team manager and his Assistant Daren Cartwright, continue with their vision for the future for the club adding strength and depth to the squad. Noel Hayes is taking last seasons under17 team into senior football, playing in the Midlands Regional Alliance. We have appointed a Junior development officer to help provide a pathway from junior to senior football. We have recruited several players and our reserves aim to progress with, primarily, a young squad intent on developing into first team players. Dave Wainwright and Simon Billyeald continue in their roles as Manager and assistant.