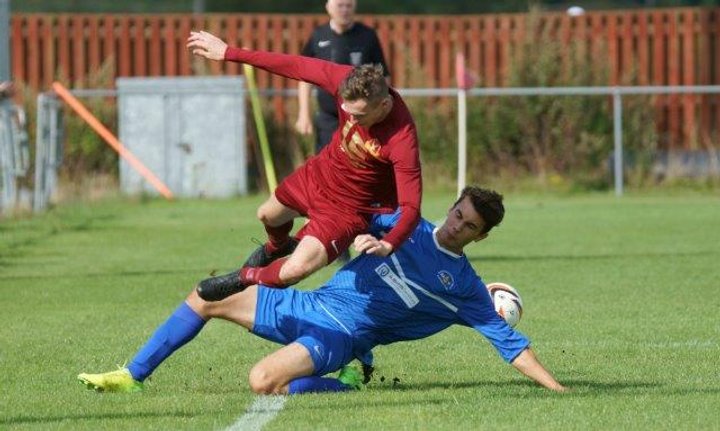 All the news from a goal-packed afternoon of football

The weekend’s football kicked off in appalling conditions on Friday night at Station Road where a youthful Collingham side took on Dinnington Town in the Black Dragon Badges North Division. The home side were reduced to ten men as early as the second minute but held their own until the 28th minute when Mason Barlow opened the scoring. Two minutes later Brad Sedgwick doubled the score from the penalty spot before adding two more midway through the second half to complete a four goal win.
Saturday provided a welcome contrast weather-wise and obviously suited both Retford United and Renishaw Rangers who were both among the goals. A devastating first 45 minutes at Cannon Park saw Retford run in no less than seven goals against Dronfield Town Reserves. Mark West struck on the 8th minute with Adam Watson getting a second a minute later. Watson’s second, on 23 minutes, was followed by a five minute hat trick from West, Zach Casburn making it seven with only 36 minutes played. Dronfield did however score the only goal of the second half, Mike Hunter netting on 78 minutes. Renishaw Rangers went one better, inflicting an 8-1 defeat on Appleby Frodingham. Again the damage was done in the first half with the home side also running up seven. Frod made the mistake of scoring first, Harry Haynes striking after 4 minutes, but Nathan Jessop equalised from the spot two minutes later. Joe Harris and Ryan Hancock made it three by the 21st minute before Jessop hit four more in a five minute spell just before half time. The second half saw just one more goal, Callum Featherstone the scorer although Renishaw did have another penalty saved. It was much tighter at Newark where a really close and entertaining match in front of a crowd of 152 saw the home side edge out Staveley MW Reserves, a 68th minute header from Jawanza Grant deciding the game. Sutton Rovers and Thorne Colliery shared six goals at Manor Way. Thorne got off to the better start, Kirk Frost scoring in the 6th and 15th minutes and completing his hat trick five minutes before the break. Callum Stockton reduced the arrears in the last minute of the first half, Rovers claiming a point thanks to Connor Evans’ goal on 57 minutes and an equaliser from Tom Doherty on the hour.

In the Black Dragon Badges South Division newcomers Rowsley 86 got off to a winning start with a 2-1 defeat of Linby Colliery. Early goals from Noah Evans in the third minute and Ricky Shortt with 12 played proved enough, David Jones scoring for Linby. A Paul Revuelta hat trick helped Blidworth Welfare come from two goals down to beat Mickleover RBL 4-3. Lewis Blount put the legion two up before Blidworth were reduced to ten men. Revuelta with two and Pete Stubley gave the visitors a half time advantage, and although Josh Pigott levelled in the second half, Revuelta’s third from the penalty spot was enough to give Blidworth maximum points. Arnold Town left it late to take the points in their home game with Mansfield Hosiery Mills. Rory Smith put Arnold ahead in the 33rd minute, Blake Vincent levelling the scores midway through the second half. There were just four minutes left when Jamie Thomas hit the winner. Clay Cross hit form with a 5-0 home win against Teversal Reserves. Josh Parfitt opened his account on 15 minutes, Grant Mitchell doubling the score three minutes later. Mitchell’s second on 35 gave the hosts a comfortable half time lead. Josh Scully scored from the penalty spot on 63 minutes and wrapped the points up with another two minutes from time. Ashland Rovers also found the net five times as they saw off Holbrook St Michaels 5-2 at Kingsway Park. Ashland twice came from a goal behind in the first half to take the lead at the interval, and consolidated their lead after the break. Scorers were Lee Townsend with two, Matt Hubbard, Ben Jones and James Scothern with Ben Cartwright and Matt Harris replying for Holbrook. Hilton Harriers were the third team to score five as they travelled to Underwood Villa, returning with a 5-0 scoreline in their favour. Max Bulmer led the way with a hat trick, Ben Eley and Scott Abbey adding one apiece.

The Macron Store Stoke Division One got underway with three games in the north and four in the south. In the South Division FC Sez made it a tough baptism for Woodhouse Colts who suffered a 9-0 defeat at the Lee Westwood Sports Centre. Declan Smith and Cameron Thurgood both claimed hat tricks with Sam McElroy adding two and Tobias Clayton one. Cromford and Wirksworth Town were 6-1 winners at Holbrook St Michaels with Lewis Land another hat trick hero, Josh Middleton, Aaron Taylor and Joe Sharkey also on the scoresheet. Sports Gateway were another team to get off to a winning start, beating Borrowash Victoria 4-1. Volkan Olgan (2), Kieron Hobday and Cameron Scott were the scorers, Jake Gallear with one for Vics on 42 minutes. There was a point each for Long Eaton Community and Wirksworth Ivanhoe after they finished level at 2-2. James Gale and Josh Law’s goals for Long Eaton were cancelled out by Jack Higton and Tom Payne.

Boynton Sports made a successful start to their campaign in the North Division, Connor Gregg getting both goals in a 2-0 win at Wakefield. Nottingham also won away by four clear goals at Linby Colliery, Neil Dalton and Tarell Peck getting two goals each. The points were shared at Melbourne Park, Nottingham Education and Retford United drawing 2-2 with Courtney Samuels getting both for the home side and Michael Wibberley and Daniel Dean replying for Retford.
Richard Lane

 The Saturday Roundup - August 24th All the news from the weekend's CML matches.

The opening day roundup  Here we go again. All the scores and scorers from the first Saturday of the new season.