The Saturday Roundup for December 12th 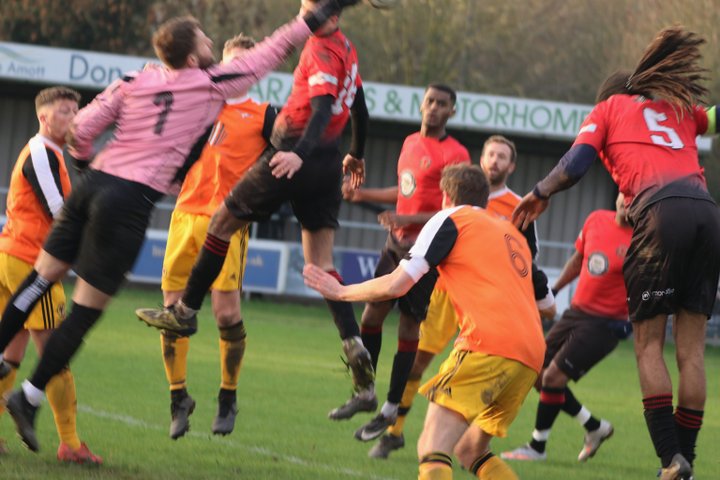 All the action from this afternoon's matches

Friday night saw the first competitive match played on Staveley Miners Welfare’s state of the art facilities, with Premier North pace-setters Clay Cross Town the visitors. The Millers kept their title challenge going with a 2-1 win thanks to goals in each half, Montelle Kamara putting them ahead on 43 minutes and Ryan Hadley getting the second with 76 minutes on the clock. Staveley pulled one back from the penalty spot two minutes later but the visitors held on to the points.
Elsewhere in the north, one of the results of the day came at the Avenue, where AFC Bentley thumped Dinnington Town 6-1. Bentley were two up early on with Joe Smith opening the scoring on 9 minutes and Luke Flanagan getting another four minutes later. Two in a minute from Craig Aspinall just after the break practically sealed the win. Dinnington reduced the arrears ten minutes from time but another two in quick succession from Shaun Carrington and Brad Sykes ensured a comfortable win. Thorne Colliery were 2-0 winners against AFC Phoenix, the goalscorers here were Jack Cross and Curtis Mann. Adi Parker was Sutton Rovers’ hero as they beat bottom side Boynton Sports 3-1 at Broadway, Conor Gregg getting one for the visitors.

In the Premier South division it was top against bottom at Blidworth, the home side recording a 6-1 win over Arnold Town. Blidworth were four up at the break, Scott Taylor netting twice with Tristan Burrell and Lee Townsend adding one apiece. Tyler Cobb pulled one back for the visitors before Taylor completed his hat trick and Alex Green completing the half dozen. Blidworth now have a clear advantage over Pinxton, who went down to 4-2 defeat at Holbrook St Michaels. Rob Fretwell put Pinxton ahead but were pegged back by goals from Ben Cartwright, Darren Cartwright, Regan Bickerton and an own goal before Tom Ellis got Pinxton’s second. Sherwood Colliery Reserves were 4-1 winners at Ashland Rovers, Tyrone Macaskill scoring twice and Jack Dando and Jack Warner also on target, Liam Black was Ashland’s scorer. Mickleover Reserves were 2-0 winners at home to Hilton Harriers. After seeing an early penalty well saved by Hilton keeper Harry Wood, the home side took the lead on 37 minutes through Will Monteiro. Surf Tefera made no mistake with a second spot kick on 40 minutes. A Calrick Dunkley strike proved decisive for Nottingham FC in their match against Linby Colliery.

Three games in Division One Central produced 23 goals, nine of which were scored by Kilburn as they wiped out Holbrook Sports. Among the goals for Kilburn were Stu Birkett and Stuart O’Toole with two apiece, Sean Fletcher, Jordan Mighty, Tremayne Anderson, Brad Wheldon and Chris Ward joining them on the scoresheet with one each. Wirksworth Ivanhoe suffered a rare defeat, Bakewell Town, playing only their third league game of the season, running out 6-2 winners. Connor Maskrey’s double was added to by Jamie Carrington, Rob Littlewood, Alex Moth and Stuart Baker. Dan Watson got both goals for Wirksworth. Woodhouse Colts beat Ashland Rovers 5-1 at the Clod with two each for Charles Simpkin and Danny Barke and one for Wez O’Rourke. For Ashland, Lewis Neville had the distinction of scoring his side’s first goal of the season.

One game in Division One South saw Melbourne Dynamo maintain their perfect record as they beat Ripley Town 5-1. The goals came from Isaac Gosling (2), Carl Allsop, Matt Savage and James Smith, with Jack Brown the scorer for Ripley.