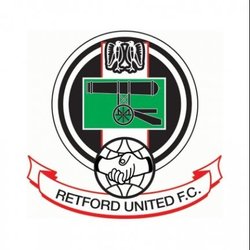 Jackson’s hard work and determination secured a site on Leverton Road, Cannon Park, and he built up the clubhouse, and pitch from nothing, a legacy that will live long for years to come. A struggle to stay in this division, Retford United were eventually relegated in 2000, but a new regime and a more focused outlook gave Retford United the springboard that they needed with the acquisition of their current ground at Cannon Park, a short walk from the town and financial input from local businessman.

2000/01 Season saw the Badgers storm the division, winning the championship and the Nottinghamshire Intermediate Cup against Matrixgrade at Eastwood Towns ground. They left the Nottinghamshire League that season and moved into the Footballing Pyramid with the Central Midlands Football League. Their inaugural season was successful against a higher standard of opposition, the Championship was brought back to Cannon Park, and a Central Midlands League Cup Semi Final was also achieved under the guidance of former Everton and Manchester City player Neil Pointon.

A consolidation period in 2002/03 as United played in the Central Midlands Supreme League, losing out after a fixture backlog at the end of the season, they finished a respectable 3rd, but the following season was one of the biggest years in the clubs history, breaking records at both club and league level. Under the guidance of Paul Hyde, in 2003/04 Retford United were crowned Central Midlands Football League Supreme Division Champions, promotion to the Northern Counties Football League was granted, but to go with this, for the first time in history the treble was achieved as United were winners of the League Cup and Floodlit Cup. This still remains an unprecedented feat. The team were a force to be reckoned with, and an appearance in the Notts Senior Cup Semi Final was the furthest the club had reached in this competition, losing out after extra time to Hucknall Town, who would go on to win the Unibond League Premier Division that season.

A much higher standard of football was then expected in the Northern Counties East League Division One, and United took the challenge finishing 8th in their first season, ex player Mark Shaw took charge for the 2005/06 season, and with a blend of experience and youth, completed the double – NCEL Division One Runners Up, (and promotion to the Premier division) and winners of the Wilkinson Sword Trophy. Another history making season in 2006/07 as yet again, the club were rewarded with the Double, this time winning the NCEL Premier Division title, Promotion to the Unibond League and lifting the Presidents Cup. During the season, United had their first International cap – Neil Harvey playing, and scoring in a three game tournament for Barbados in the Caribbean Cup, and the best ever run in the FA Vase with the fifth round being reached, losing out to Leamington FC.

In 2007/08 under the guidance of Peter Duffield, the club won the UniBond League Division One South Championship by a massive thirteen points, gaining 99 points in total. Added to that was the Chairmans Cup, in a North v South challenge against Bradford Park Avenue where United ran out 2-0 winners. United had a strong run in the FA Trophy, before going out at the First Round stage at Histon FC, but they did win “Team of the Round” for their performance in an earlier round.Disappointment however in a tough season off the field as, among other things, promotion to the Premier Division was not allowed due to the ground not being up to standard.

Since 2010 the club has had mixed fortunes, and in 2011-12 Season they marked a fantastic season by becoming Champions of the NCEL Premier Division. Because of financial constraints, the club decided to continue in the NCEL rather than accept promotion, and have had mixed fortune since. 4th in 2013, 9th in 2014, and 20th in 2015. Last season the club finished in 15th place after Chris Sellars came in towards the back end of the season and saved them from what seemed certain relegation. Chris was replaced at the start of this season by Chairman Wayne Radford and replaced by Darren Giovannetti and Brian Entwistle. The club has had a mixed bag this season, after losing out in the FA Cup to newcomers Leicester Road FC