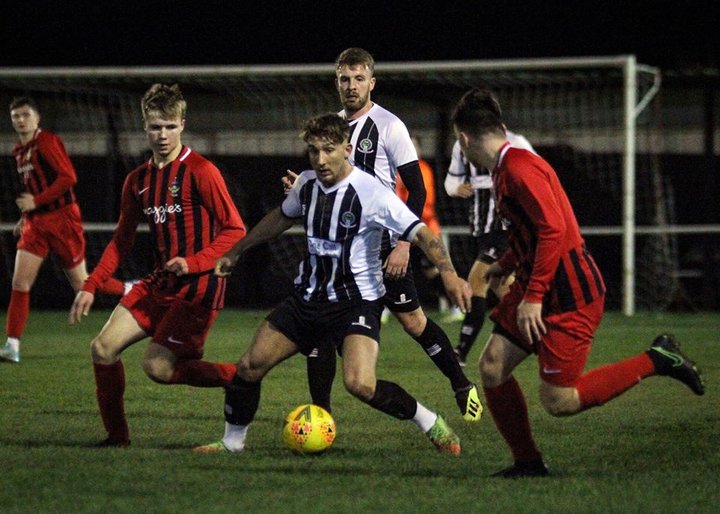 A round up of the midweek matches in the CML

There were five matches in five different competitions tonight

In the third round of the Buckingham Insurance League cup Teversal Reserves scored twice in the closing stages to beat Ashland Rovers 3-1. Tevie took an early lead, Danny Barke putting them in front in the 9th minute. Ashland drew level with 63 minutes played when Haydn Wharmby slotted in a penalty. As the match headed for extra time Joe Geeson gave the home side the lead on 84 minutes, James Summers confirming the win two minutes from time.

The much delayed Abacus Lighting Floodlit Cup second round tie between Dronfield Town Reserves and Collingham finally got the go-ahead and it was the Nottinghamshire side who went through after a 3-2 win. Russell Hobson opened the scoring for the home side, but Collingham were ahead at half time with goals for Jake Morrison and Chris Self. Both sides added to their score in the second half, Greg Mason netting for Dronfield, Will Tomlinson getting a third for the visitors.

Arnold Town pulled off an impressive 3-1 win in the Notts FA Senior Cup third round tp put out Southwell City, currently second in the Notts Senior League. Playing with a strong wind in their favour Southwell led at the interval with a goal in the 16th minute. Arnold made far better use of the conditions in the second half, Andy Start levelling on 55 minutes before putting them ahead in the 81st minute. Progress to Round four was confirmed by a Jack McLachlan goal two minutes from time

There was one match in Division One, Harworth Colliery following up their eleven goals on Saturday with four more as they beat Chesterfield Town 4-2 at Scrooby Road. Lee Naughton scored twice and there was a goal apiece for Elliott Carpenter and Dan Murdock, while Harry Brown and Neil Hollingworth replied for Chesterfield.

In the Steel Beams Derby Presidents Cup Holbrook Sports were 3-0 winners against Boynton Sports thanks to goals from James Toplis, Louis Danvers and Matt Pearce.

The final third round match in the League Cup went ahead, almost seven weeks after the first tie took place, Retford United claiming the final quarter final spot with a 4-1 defeat of a youthful Long Eaton Community side. Mark West gave Retford a 20th minute lead, claiming his hat trick with further goals on 59 and 67 minutes. Long Eaton got a deserved consolation in the final minute before Zach Casburn added a fourth for Retford with a penalty in added time.