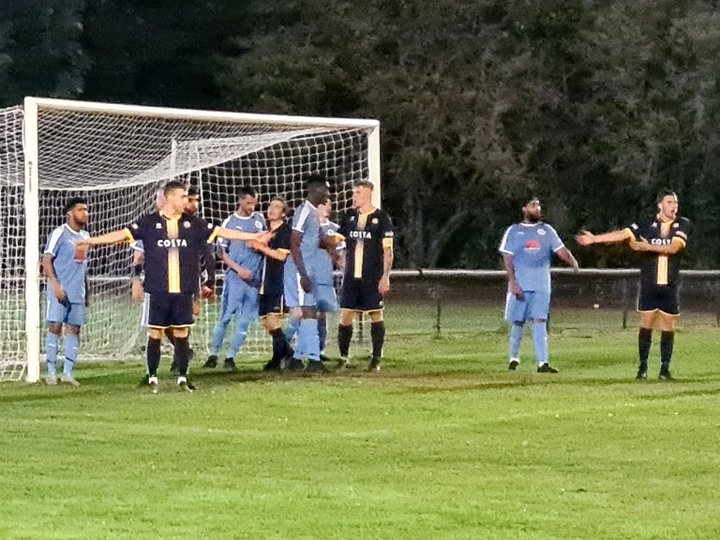 A roundup of the midweek action in the Central Midlands

There was almost a full programme of matches in the Premier North division in midweek. On Tuesday night Clay Cross Town withstood a second half comeback from AFC Bentley to shade the match 3-2. The Millers were well in control at half time. Jordan Hendley gave them an 11th minute lead, Lewis MacAskill doubled the lead on 24 minutes with Josh Scully getting a third ten minutes later. Bentley struck back straight after the interval through Tom Speight, Theo Mowatt got another on 64 minutes but the visitors couldn’t find an equaliser. The other match was much more clear cut, Harworth Colliery beating Crowle Colts 6-0 at Scrooby Road. Harworth went three up in 23 minutes, Bayley Lowe putting them in front on 7 minutes, Ainsley Finney and Tom Bedford also scoring early goals. Finney got his edging their game on the hour with Jordan Woodall and Luke Black with a penalty scoring late goals to complete the half dozen.

Wednesday night saw the end of the last two 100% records. Thorne Colliery came from two down to draw 2-2 with St Josephs Rockware. The visitors went ahead with an 8th minute penalty from Jaden Thackery and got a second through Taylor Thackery in the 34th minute. Jimmy Walker got one back a minute later, with Josh Gelder equalising after an hour. The other team with a perfect record, Dinnington Town, went down 3-1 at Newark Town. Jake Hardy gave Newark the lead a minute before half time, adding a second from the penalty spot midway through the second half. Jordan Turner reduced the arrears on 78 minutes, but sub Elliott Burrell completed the win in the final minute. Reford United completed a 2-0 defeat of AFC Phoenix thanks to Mark West after 4 minutes and Dean Conway with 66 played. A welcome three points for Collingham who beat Dearne & District 5-1 at Station Road. A will Hollingsworth hat trick inspired the win with Adam Hillary and Archie Townrow also scoring, Dearne’s reply coming from Nicholas Guest. Sheffield Reserves were 4-0 winners against Sutton Rovers with goals from Max Rhodes (4 minutes), Ethan Wilkinson (14), Mackenzie Ross (58) and Owen McGourlay (68 minutes)

There was one game in the Premier South division, Mickleover Reserves edging past Nottingham 3-2. The Derby side’s goals came from Pablo Mills with two and Fin Barker, Nottingham scoring two in the second half, both by Martin Bassey.

An ill-tempered game In the Macron Store Nottingham Division One South saw Carlton Town B inflict a first league defeat on Derby Singh Brothers. Daniel James gave Singh Brothers an early lead direct from a free kick but a superb strike from Ellis Tongue levelled things by the interval. Tongue struck again in the second half to give Carlton the points