The CML Roundup for April 24th 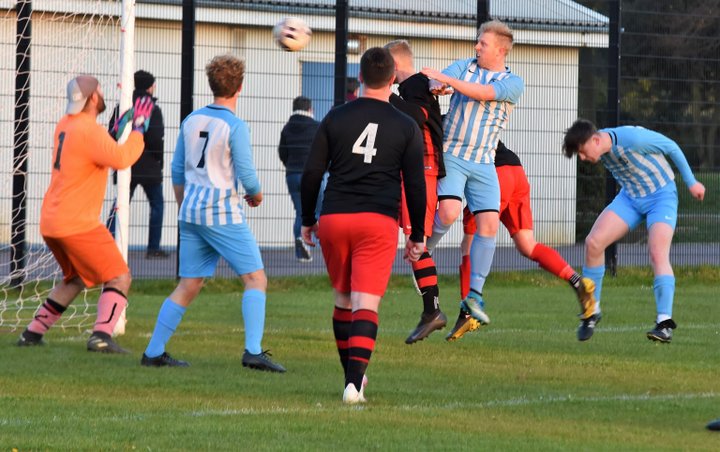 A roundup of all the week's action in the CML

Thorne Colliery made it back to back wins in Division One North as they edged past 780 JLC 2-1 at Moorends. Sam Woodward put the home side ahead before Ollie Bradbury equalised. A second half goal from Brad Heaps secured the points for Thorne. Harworth Colliery were quickly out of the traps as they faced Bessacarr for the second time in four days, Rio Allen and Marley Alder put. ing them two up in the first nine minutes. Michael Wibberley made it three on 25 minutes, a late own goal rounding off a 4-0 win. Glapwell returned to winning ways with a 3-0 defeat of Ollerton Town at Walesby Lane. All three goals came in nine minute spell early in the second half. Ben Copestake opened the scoring in the 50th minute, Rob Holland doubled the lead seven minutes later with Joel Searson adding the third shortly afterwards.
Ashland Rovers played their third home match in a week, going down 5-0 to Bakewell Town. Aaron Maund grabbed a hat tick for the Derbyshire side with Freddie Hatcher and James Bean also on the scoresheet.

With Linby Colliery and Heanor Town both pulling out during the week, the South division now contains just six teams, with Long Eaton Academy and Melbourne Dynamo both maintaining their 100% records after the midweek games. Melbourne travelled to Clifton All Whites and returned home with a 4-2 win. Matt Brian scored his second successive double, Jack Goodband and Harry Foxon adding one each for the visitors, Ryan Henshaw and Matthew Jelfs replying for Clifton. Long Eaton had less room to spare, a 49th minute goal from James Gale giving them the points against Selston.

On Thursday, the 12 team Chairman’s Cup finally got underway with Mickleover Reserves getting off to a winning start as they beat Holbrook St Michaels 3-0 with goals coming from Emilio de Abreu, Davon Smith and Surf Tefera.

The remaining three groups in the Chairman’s Cup saw their opening matches. Crowle Colts left it late to get the winner at AFC Bentley, Kurt Robinson netting the decider three minutes from time. Earlier, Daniel Barrowcliffe had given Crowle an 8th minute lead which was equalised on 51 minutes by Brad Sykes. A late scoring burst gave Retford United a 4-1 home win over Newark Town. Newark took the lead on 12 minutes through Mitch Griffiths, Retford levelling from the penalty spot with 39 played, Mark West on target. A strong finish saw Retford add three more in the last 12 minute, Adam Daughtrey, Brandon Ashmore and Igor Mlynarski with the killer goals. Clay Cross Town were 3-0 winners against Underwood Villa. Lewis Macaskill got them off to a good start, scoring in the 7th minute, Callam Lytham adding a second with 22 minutes played, Macaskill rounding things off with his second just after the hour mark.

Sheffield FC’s perfect record went at Harworth Colliery where the two sides fought out a 2-2 draw. Scorers for the home side were Michael Wibberley and Bayley Lowe with Max Rhodes and Cameron Burgin ensuring the points were shared. 780 JLC got their first points in style as they travelled to Glapwell’s Hall Corner ground, returning home with a 4-0 win under their belts. Joel Chapman was responsible for two goals with Alex Bradbury and Cam Barrows adding one each. A goal for Henry Tyers proved decisive as Thorne Colliery registered a single goal victory at Ollerton Town.

In the Central Division Kilburn carried on their winning run, a 7th minute Chrissy Ward goal being enough to take the points against Holbrook St Michaels. Cromford & Wirksworth Town shared the points with Bakewell Town, the match ending 1-1. Stuart Baker put Bakewell ahead, following up his penalty kick to score at the second attempt with Rob Inckle replying for Cromford. Wirksworth Dynamo inflicted a 3-0 defeat on Ashland Rovers with Tom Mellor, Jack Higton and Tom Watson all finding the net.

Melbourne Dynamo suffered their first defeat of the season at PMG in a game of two penalties, Melbourne failing to score from theirs while PMG’s Daniel Adefieh made no mistake with his. In the other South section match Clifton All Whites ran out 4-2 winners at Selston. Ben Cooke scored the day’s only hat trick for Clifton with Ryan Henshaw also scoring. Lewis Parkin and Damien James replied for Selston.

The CML Roundup for April 17th  A roundup of the week's matches in Division One.