The CML Roundup for September 25th 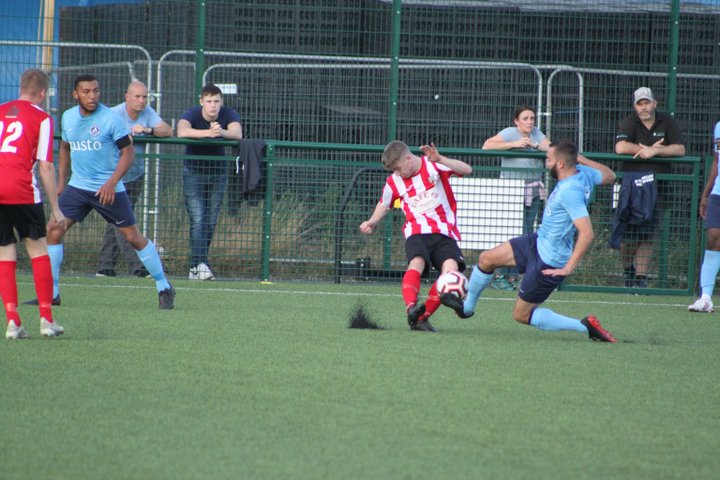 A roundup of the day's League and Cup games

Friday night saw the top two teams in the Premier South division in opposition as top of the table Blidworth Welfare travelled to Mickleover Reserves. Blidworth took the lead with a Chris Neilson goal, but Mickleover were well in front by half time thanks to two Josh Satchwell goals and one from George Atwal. Tristan Burrell reduced the lead, but a Fin Barker strike made the final score 4-2.

On Saturday Pinxton broke the draw habit with a 5-0 defeat of Arnold Town at Wharf Road. Jay Cooper got a hat trick with the others coming from Rob Fretwell and John Fones. Linby lost for the first time this season in a high scoring game at Nottingham FC. Calrick Dunkley put the hosts in front in the third minute, Harley Shooter levelling before a Blaize Hall double put Nottingham back in front. Sean Craven and Jack James made it 3-3 at the break. Rory Smith put Linby in front for the first time before Hall completed his hat trick and Aadam Akhter and a second for Dunkley made the final score 6-4. Mickleover RBL were 3-2 winners against Ashland Rovers. Scorers for Mickleover were Daniel Minto, Sam Vickers and Sam Groves with James Whitmore getting both for Ashland. There was a first win of the season for South Normanton as they beat Mansfield Hosiery Mills 3-0 at Lees Lane all three goals coming in the second half. Cameron Davidson got the first on 65 minutes the evergreen Pete Stubley adding a second on 84 minutes and Matt Fowler sealing the win in the final minute. Hilton Harriers climbed off the foot of the table with a 2-0 win against Holbrook St Michaels, both goals scored in the early stages by Scott Abbey on 10 minutes and Max Bulmer with 25 minutes on the clock. A single goal by Logan Toplis proved enough to give Rowsley 86 the points at Teversal Reserves.

There were big wins for the top two sides in the Premier North division. Thorne Colliery put six past Sheffield Reserves without reply. An own goal on 12 minutes set Thorne on their way with Shay Evans Booth making it two on the half hour. Evan Fortune West got number three a minute after the restart, Evans Booth and Andrew Walkden quickly adding further goals, Evans Booth completing his hat trick two minutes from the end. Newark Town completed a profitable week with a 7-1 win over a below strength Clay Cross Town. Jake Hardy and Lewis Chambers put Newark two up in the first nine minutes, Chambers getting a third on the stroke of half time and another in the 52nd minute. Mark Faflik and Matty Clarke brought the total to six before Lewis Macaskill got one back on 82 minutes, Chambers scoring his fourth with a last minute penalty. AFC Bentley had another good result as they beat Harworth Colliery 3-0. Tom Speight put them in front on 38 minutes with Zack King completing the win with goals in the 69th and 82nd minutes. Dearne and District’s Nicholas Guest put his side two up against Staveley Reserves in the first six minutes but Staveley were rescued by two 16 year olds, Zander Duhameau and Harley Butcher-Simpson scoring to claim a point for the visitors. Glapwell were another side to go in front early with Ben Copestake (2) and Shane Burton putting them three up against Kiveton Miners Welfare in the first half hour. Before Elliot Fox and Cory Goodwin reduced the deficit by half time. Kiveton pressed hard for the equaliser but Glapwell held on for the win. At the lower end of the table Sutton Rovers picked up a much needed victory as they beat AFC Phoenix 5-1, Phoenix went in front with a goal from Ildephonse Hussein in the 8th minute but two from Adi Parker gave Sutton the lead by the 25 minute mark. Harvey Smith scored a third on 70 minutes, Liam Webb and Harvey Wood both scoring in the closing stages. Crowle Colts have also fallen on hard times in recent weeks, they picked up the points with a 3-1 defeat of Askern Miners, who led at half time with a Haydn Tomlinson goal. Crowle took charge in he second half with two goals from Ryan Bonser and one for Corey Bacon.

No games in Division One this week, a full set of Presidents Cup games taking their place. Biggest win of the day saw Melbourne Dynamo crush Harworth Colliery 13-0. There were hat tricks for James Smith, Ben Cooke and Jack Goodband, two from Jack Bodill and one each for Macauley Jones and Matt Jones. Ripley Town beat Ollerton Town 9-0 Jack Brown scoring five, Lewis Goddard two with Jason Barratt and Josh Tonks also finding the net. There was another big win at Bakewell where the home side beat Carlton Town 8-0, the goals shared between Stu Baker (2), James Bean, Jonno Hutchinson, Jamie Carrington, Alex Moth, Aaron Maunde and Rob Littlewood. Cromford and Wirksworth Town won 4-1 at Retford FC on Friday night thanks to two goals from Matthew Wilkinson and one for Dec Jenkins and Sam Smith, Retford replying with a Callum Wilson goal. A Liam Cooper goal for Bessacarr gave them the win over Woodhouse Colts and there was a 2-1 win for Castle Donington against Ashland Rovers, the winning goals coming from Matt Greasley and George Boyd, Owen Walker getting one for Ashland. Derby Singh Brothers won 5-0 at Holbrook St Michaels, A hat trick here for Simeon Lawrence, Khaleeq Shafique and Tirhys Davidson also on the scoresheet. Blidworth Welfare beat Linby Colliery 3-1, their goalscorers Brad Clarke and Matty Toseland, the other an own goal, Linby replying through Jack Harrison. Pmg came though 2-0 against South Normanton thanks to Musa Jawara and Noah Tesfalem. Heanor Town won 6-2 at Dearne & District and Bottesford Town were 5-1 winners at Mansfield Hosiery Mills.