The final Central Midlands Roundup of the season 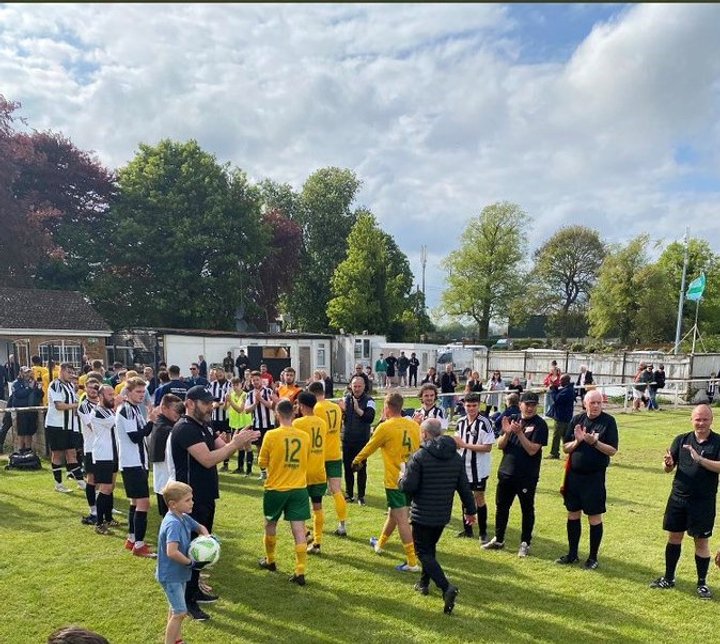 Crowle Colts had to switch their Premier North game with Collingham to Station Road, but the effect was minimal as they dominated the match winning 4-0 despite having to replace their keeper in the first half. Ben Johnson put them ahead on 43 minutes with Hashlee Cranidge scoring shortly afterwards. Crowle kept up the pressure after the break, Ryan Bonser adding a third ten minutes into the half, Kurt Robinson rounding things off with a spectacular effort in added time. Thorne Colliery kept themselves in the running for the title, beating a patched up Clay Cross side 2-0. The goals came early in the match, Callum Nicell scoring after 8 minutes, Callum Verhees with the second with 22 minutes played. Dearne &District drew 2-2 with Askern Miners. Lewis Gilbert put Askern in front, Matty Thornton equalising before Jacob Toomer restored Askern’s lead. The visitors led until the final minute when a Sam Hanna penalty claimed a point for Dearne. Glapwell beat Harworth Colliery 4-0 in the sixth of their run of seven home games. Top scorer Ben Copestake scored his second hat trick of the week, taking his season total to 35 with James Keenan also scoring

In the Premier South division Pinxton rounded off a disappointing season with a 2-0 defeat of neighbours South Normanton Athletic thanks to goals from Liam Carver in the 14th minute, Zak Melrose adding the second with 35 played. Mickleover RBL bounced back from Sunday’s cup defeat with a 4-0 win against Arnold Town, Owen Brader and Lewis Durow getting two goals each. Cup winners Linby Colliery beat Hilton Harriers with an early Travis Shooter goal. Linby went on to play their third match in five days on Thursday night, the schedule taking its toll as they went down 4-0 to Sherwood Colliery Reserves, Jordan Roberts opening the scoring after 5 minutes before a three goal burst in eleven second half minutes saw Tristan Burrell add two and Ethan Wiesztort one to complete the win. Mickleover RBL secured third place in the table, with a 4-1 win at Nottingham FC, the goals coming from Matthew Green (2), Dean Oliver and Joshua Wright.

WEEKEND MATCHES
Bakewell Town completed a league and Cup double on Friday night.
Having already won the Division One Cup, they added the Central division title and were presented with the trophy after their match with Cromford and Wirksworth Town. This ended in a 2-2 draw with an Aaron Maund double on 9 and 18 minutes putting Bakewell ahead at half time before Dec Jenkins, from 35 yards, and Mike Whittall six minutes from time pulled it round for Cromford.

Also on Friday SJR Worksop and Crowle Colts completed their seasons with Crowle running out 2-1 winners, Taylor Thackery scoring for SJR while Kurt Robinson and an own goal sent Crowle home with the points.

Saturday saw the destination of the last of the league titles finally decided as, after an epic battle involving four teams, Newark Town were crowned champions. Strangely after such successful seasons, both teams left in contention lost their final matches. Newark were beaten 1-0 at Glapwejj, the only goal coming from ace marksman Ben Copestake after 14 minutes. Thorne Colliery, the other side left in the race went down 4-1 at home to Retford United. Thorne suffered an early blow, having to replace injured keeper Dan Porteous after only 20 minutes. The game remained goalless until the 41st minute, Mark West putting the visitors ahead, Aaron Fell doubling the score four minutes later. West made it three shortly after half time bringing his total to 47 for the season, Liam Frost with the final goal ten minutes from time. Thorne did manage what was hardly a consolation goal from Evan Fortune-West in the last few minutes. Elsewhere Harworth Colliery were 3-1 winners at Dinnington Town, All three goals came in a seven minute spell in the second half, Liam Arnold, Cory Goodwin and Harry Dunbar all finding the net with Kiyani Clayton scoring for Dinnington. AFC Bentley ended the season with a 3-2 defeat of Askern Miners. Neil Johnstone got Bentley’s opener on the half hour mark, Tom Speight with another two minutes later. Askern fought back, Joel Tomlinson scoring two minutes after the restart and Marcus Goodwin equalising on 65 minutes before Craig Aspinall won it for Bentley four minutes later.

In the Premier South division Mickleover RBL, unbeaten in their last 13 league games, ended the season in style with a 5-1 win at Holbrook St Michaels. Lee Hillier scored twice, Brandon Meehan converted a penalty and there were also goals for Matt Green and Joe Conkerton, Josh Barnes with Holbrook’s goal. Sherwood Colliery Reserves finished their time in the league with a resounding 7-1 hammering of Nottingham FC. For the Wood Ben Jones and Tristan Burrell scored twice and there was a goal each for Brad Newby, Matty Hague and Eden Homer with Mo Sillah the scorer for Nottingham. Hilton Harriers won 3-2 at Wirksworth Ivanhoe, Jack Thatcher’s double and Troy Pitkin gaining the points with Wirksworth replying through James Colebourne and Tom Mellor. Linby ended an exhausting week of four matches in seven days with a 2-1 defeat at home to Arnold Town despite going in front with a 5th minute Tremere Lindo. Sergiy Korposh equalised for Arnold in the 20th minute, a Liam Black goal giving them the win.

The last of the cup finals was played at Blidworth, Bessacarr defeating Melbourne Dynamo 3-1 in the Presidents Cup. James Smith scoring for Dynamo, Bessacarr triumphing with two from Ronin Herrington and for Jordan Wilkinson.

Finally for this season in the Macron Store Nottingham Division One Central South Normanton drew 2-2 with Ashland Rovers, Bailey Morgan and Oliver Bibby for the Shiners, Harvey Lane and James Whitmore for Ashland.

That’s it for another season.