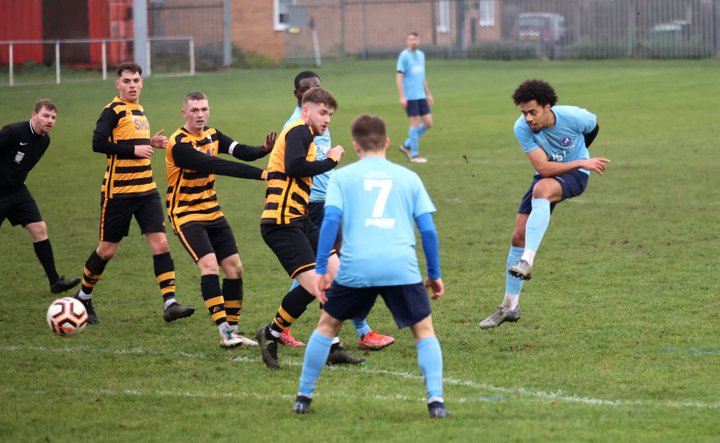 More accurately the five games of Christmas, as a combination of Covid and waterlogged pitches caused a full set of fixtures to be reduced to just a handful.

Only one match took place in the Premier South division over the holiday period, Nottingham FC scoring twice in added time to beat Teversal Reserves 4-2. Tevie had reached half time with a two goal lead, Ben Agbakosi scoring in the 38th and 45th minutes but the tables were turned in the second half. Tyler Cobb got a goal back on 66 minutes, Lamin Manneh levelling the scores five minutes later. The scores were still level at 90 minutes before strikes from Devin McGuane and Joel Searcey in injury time gave the points to the visitors.

The other four games were all in the Premier North division. Newark Town go into the New Year on top of the table after a closely contested local derby saw them win 1-0 at Station Road. A game which could have gone either way was settled by a 25 yard goal from player-manager Nathan Arnold two minutes before half time. Dearne and District camsawe from behind to beat AFC Phoenix 4-2 at Brinsworth. Phoenix led at half time, Ildephonse Hussain’s double being answered by a goal from Dan Evans. Dearne took control in the second half Evans getting a second with Dan Ravenscroft and Cameron Hunt ensuring maximum points for the visitors. Some Christmas cheer for Sutton Rovers, who were 3-1 winners against struggling Askern Miners. After being reduced to ten men in the early stages, Sutton went in front with Callum Stockton’s 38th minute header, Joel McCabe doubling the lead on the stroke of half time. As the numerical advantage started to show, Bruno Holden got a goal back for Askern but Nasr Ibrahim’s injury time strike clinched it for the hosts. The final game of 2021 saw Staveley Reserves put Kiveton Miners Welfare to the sword, the final score 8-2. Staveley were five ahead at the interval, with Reece Clegg and Zander Duhameau both getting a couple, Danny Fullwood also scoring. Kiveton staged a revival at the start of the second half, Sam Thompson and Elliot Fox reducing the lead, but further Staveley goals from Clegg, who completed his hat trick and subs Logan Liggins and Sam Jackson rounded off the scoring.