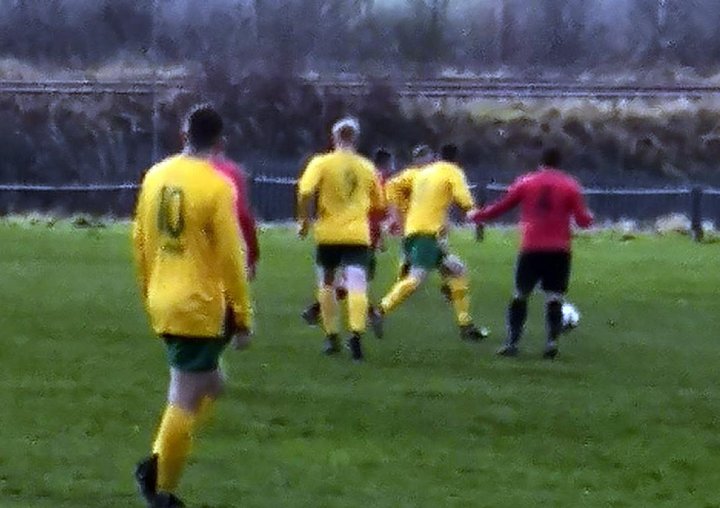 A lot more action today, here are the details.

The last Saturday of the decade produced the novelty of an almost full set of matches as the weather relented a little.
Only one match fell by the wayside in the Black Dragon Badges North division, Newark Town taking the opportunity to go 12 points clear at the top with a 3-0 win at Renishaw Rangers. Daryl Price put Town ahead on 24 minutes and got a second from a free kick five minutes later. A goal a minute into the second half by George Asplin sealed the win. With Dinnington on League Cup duty, third placed Harworth Colliery missed out on a chance to reduce the gap as they fell to a single goal defeat at Phoenix, the all-important decider coming in the 39th minute from Chris Hopkins. Retford United moved into fourth spot as they breezed past Sutton Rovers 6-1. Top man for the Badgers was Dean Conway who hit four, three of which came in the first 18 minutes. Mark West got number four on 28 minutes, adding another three minutes into the second half. Conway completed his personal tally with 64 played, Mitch Wain grabbing a consolation for Sutton a minute later. Another team quick off the mark were Crowle Colts who put four past Askern in the first half. Two goals from Kurt Robinson and one each for Tom Moulds and Dan Barrowcliffe were more than enough to settle things, the second half proving goalless. A double from Chris Self saw Collingham home against Thorne Colliery. Self struck on 65 minutes and although Darren Bird levelled for Thorne with nine minutes left, the striker got the winner five minutes from time. Dronfield Reserves celebrated the playing of their first home league game since mid-October by beating Staveley Reserves 2-1. Steven Booth and Liam Hogg were Dronfield’s matchwinners, Reece Clegg replying for the visitors.
The South division fixtures were reduced to three, two of them having quite an impact at the top of the table. Clay Cross Town suffered their first league defeat of the season at Holbrook St Michaels, going down 3-0 to goals from Sam Williamson, Morgan Holloway and Sam Chambers. It was first v third at Wharf Road where Sherwood Colliery Reserves pulled off an impressive 4-0 win over Pinxton. Jordan Ingram put the Wood a goal up at half time, going on to complete a hat trick while Liam West also found the net. The results put Sherwood four points clear at the top although Clay Cross have a game in hand. The other game to beat the conditions was at the Fieldings where Mansfield Hosiery Mills and Swanwick shared the points in a 1-1 draw the hosts benefitting from an own goal while Zak Melrose got one for the Swans.
The Buckingham Insurance League Cup inches its way towards the quarter finals. Today’s match saw Dinnington Town progress following a 4-0 defeat of Underwood Villa, the match being switched to Phoenix Park following numerous postponements. The goals for Dinnington came from Ashley Layne with two, Joe Byron and an own goal.
Match of the day in the Macron Store Stoke Division One North where joint leaders St Josephs Rockware clashed with Boynton Sports. St Josephs finally surrendered their 100% league record as the match finished all square at 2-2. Tom Mullen and Daniel Wiltshire’s goals for the home side were cancelled out by Boynton’s Kurtis Cockburn and Nathan Davies. Nottingham FC were beaten 3-2 at home by Selston for whom Oliver McCarthy (2) and Ben Moore got the goals with Rico Spencer and Seke Spence replying for Nottingham. Wakefield stretched their unbeaten run to six games with a 3-1 win at Harworth Colliery thanks to goals from Amos Kabeya, Khalid Suleiman and Pierre Pinnock. A 98th minute winner from Greg Carroll pinched the points for Epworth Town Colts at Education FC. Epworth’s other goals came from Matt Fowler and Harrison Coley, with Morgan Wallace and Tyrone Swift on target for the home side.
In Division One South Cromford & Wirksworth Town maintained their perfect league record by beating Borrowash Victoria 3-1 thanks to Tom Savage with two and Ryan Smith. Woodhouse Colts and FC Sez shared six goals at the Clod, with Wes O’Rourke (2) and Max Radford’s goals for Woodhouse being matched by two for Dec Smith and one from Jimmy Hassall. Long Eaton United Community were 3-1 winners at Bakewell Town whose goal was scored by Aaron Maund.
There was one match in the Steel Beams Derby Presidents Cup, Wirksworth Ivanhoe putting four past Chesterfield Town with Dan Watson scoring twice and Lucas Brough and Matt Dranfield adding one apiece.
Richard Lane

 The Saturday Roundup for January 4th A full fixture list in the Central Midlands Leaue - here are the details.

The Saturday Roundup - December 21st  Yet again the weather is the winner-here is the news of what survived.