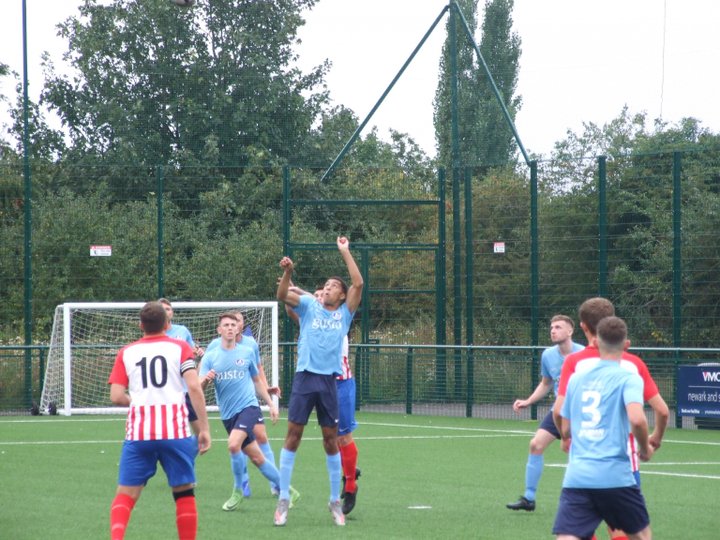 All the news from the weekend's matches

A rare Thursday night match in Premier Division south saw Mickleover Reserves relentless hunt for goals temporarily checked by a hard-working Mansfield Hosiery Mills side. After a goalless first half the visitors finally broke the deadlock on 56 minutes with a Devon Smith goal, adding a second ten minutes from time, Danny Atwal the scorer.

Friday night’s match was at Dinnington where another three figure crowd saw the home side complete a 5-1 win over Collingham. The visitors took the lead with a Will Hollingsworth goal but Dinnington were level through Adam Darton by half-time and built on this, scoring four more in the second half with, Brandon Ashmore, Ashley Kelly, Liam Bryan and Andrzej Gordon-Hides all hitting the target.

Saturday’s Premier North matches saw two teams pick up their first points of the season with decisive wins. Kiveton Miners Welfare beat Crowle Colts 4-1 at Stone Close, their goals coming from Elliott Fox with a penalty, Dan Neath, Cory Goodwin and an own goal, Stuart Longbone getting a last minute consolation for Crowle. Sutton Rovers went one batter as they inflicted a 5-1 defeat on Dearne & District. Harvey Wood set them off with a goal in the 11th minute, Callum Stockton making it two with 20 played. Cain Wellings extended the lead a minute before half time with Leyton Beck making the game safe two minutes after the restart. Thomas Davage pulled one back for Dearne midway through the half, Mitch Wain having the last word for Sutton three minutes from time. At the other end of the table Thorne Colliery made it four wins from four winning 5-0 against Glapwell. Thorne were four up by half time through Evan Fortune-West (6), two from Morgan Brown in the 11th and 44th minutes and Shay Evans-Booth (16 minutes). Fortune-West scored his second on 57 minutes to complete the scoring. A mention for Glapwell keeper Jack Hazledine who made some outstanding saves to keep the score within reason. Two goals from Josh Bowkett and a penalty from the reliable Theo Mowatt gave AFC Bentley a 3-0 win at AFC Phoenix while Harworth Colliery beat Sheffield Reserves by the same margin with Greg Archer, Charlie Baird and Harvey Baird all finding the net. Mark West struck twice in Retford United’s 4-0 defeat of Askern Miners. West put Retford ahead on 32 minutes with Bruno Holden adding a second five minutes into the second half. West got his second with an hour on the clock before Dean Conway got number four in the 73rd minute. Clay Cross had to come from behind to record a narrow 2-1 win over Staveley Reserves at Mill Lane. Staveley went ahead with a 15th minute goal from Reece Clegg and held the lead until the 65th minute when Josh Parfitt equalised, Josh Scully getting what proved to be the winner five minutes later. The Millers then had the luxury of missing a penalty in added time. Newark Town were made to fight to the end by a tenacious St Josephs Rockware side who battled for every ball. Lewis Chambers put Newark ahead with 33 minutes played Jaden Thackray pulling St Josephs level in the 41st minute. Chambers’ second three minutes later proved to be the decider, both sides going close in the second half.

Eagle Valley was the place to be for goals in the Premier Division South as Arnold Town went down 7-3 at home to Ashland Rovers. Four goals in the opening 12 minutes set the tone with Connor Barnes’ and Brad Newby’s goals for Ashland being wiped out by two from Tyler Cobb. Barnes got his second in the 20th minute before Ashland ramped up the pressure in the second half as Ben Jones scored in the 61st and 65th minute. Kian Leavesley added a third for Arnold before Barnes completed his hat trick, Newby scoring Ashland’s seventh in the last minute. Plenty of goals also at Mickleover RBL where the home side lost by the odd goal in seven to Holbrook St Michaels. Dylan Garnett, Regan Bickerton, Ben Cartwright and Liam Gregg were Holbrook’s match winners with RBL’s reply coming from Liam Oliver with two and Jordan Lee. Pinxton are becoming the division’s draw specialists, They shared the points for the third time this season 1-1 at Linby Colliery. Scorers here were Sean Craven for Linby and Josh Deakin for Pinxton. Wirksworth Ivanhoe picked up their first win at this level as they travelled to South Normanton, returning home with a 3-1 scoreline in their favour. Tom Mellor put them in front on 39th minutes but Henry Brooks levelled within a minute. Mellor’s second, on 52 minutes, restored Ivanhoe’s lead before Matt Dranfield sewed up the points ten minutes from time. Blidworth Welfare returned to the top of the table following a 2-1 win at Nottingham, thanks to goals from Tristan Burrell (10) and Kai Wilson (50). Blaze Hall scored for Nottingham on 20 minutes.

Two Alex Moth goals in the first half gave Bakewell a half time lead against Cromford & Wirksworth Town in Division One Central. Steve Mallinder halved the lead before James Bean got number three for Bakewell. Despite being reduced to ten men, Cromford pulled another back through Scott Taylor, but couldn’t find a third. Holbrook St Michaels scorers in a 3-1 win at Blidworth Welfare were Joe Cluskey, Jack Cluskey and Jordan Samuel, Jake McKenna netting for Blidworth. Woodhouse Colts went down 5-3 at home to South Normanton. The goals here came from Josh Poxon, Chris Rant, Jack Richardson, Thomas Allen and Oliver Bibby for the Shiners and James McGowan, Jaden Bull and Tom Clarke for Woodhouse.

Two matches only in Division One South. Heanor Town drew 2-2 with Melbourne Dynamo. Ben Cooke gave Melbourne the lead in the 18th minute, Ashley Butterworth restoring parity just three minutes later. Jordan Lambert put Heanor in front with 40 played, Melbourne taking a point with Karl Munton’s goal on 47 minutes. PMG edged out Castle Donington 3-2 thanks to Musa Jawara’s two goals and one from Ebrima Kuyateh, the visitors replying through Sam Murfin and an own goal.