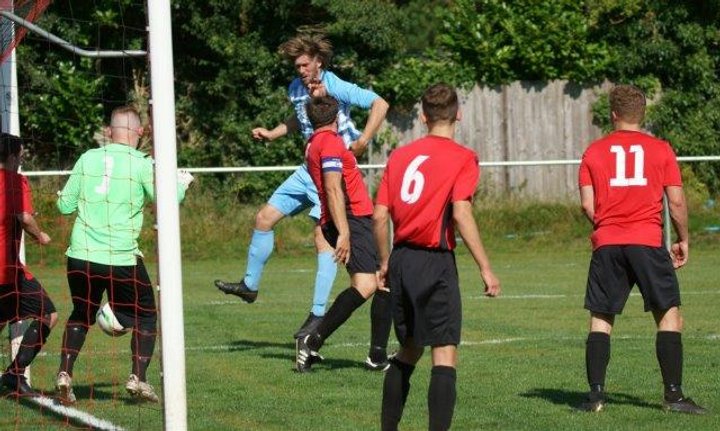 All the news from the weekend's CML matches.

Thanks again to Mick Gretton for the photo of Linby's game with Clay Cross.

Friday night’s match gave Mansfield Hosiery Mills a boost off the pitch with over 200 turning out, but on the field it was a different matter as Kieron Debrouwer and Rob Fretwell scored all of Pinxton’s goals in a 7-0 win. Debrouwer set the standard with an overhead kick on 21minutes, adding a second six minutes later, Fretwell’s 35th minute strike putting the visitors comfortably ahead by half time. The same player made it four shortly after the break, Debrouwer completing his hat trick from the penalty spot with 55 played. The scoring was completed by Debrouwer’s fourth and Fretwell’s hat trick also from the spot. A third penalty was well saved by keeper Liam Gilbourne in the dying minutes.

Saturday’s action in the Black Dragon Badges South division saw Blidworth Welfare and Ashland Rovers fight out a 3-3 draw. A Pete Stubley double got Blidworth off to a perfect start before Matt Hubbard reduced the arrears. Paul Revuelta added a third against his former club to put the home side well ahead at half time. After Blidworth had been reduced to ten men, Connor Barnes and Jonathan Castelli’s goals helped Rovers to a share of the points. Chris Smith gave Hilton Harriers the lead against Holbrook Sports at the Mease but Holbrook fought back and after missing a penalty, Lee Carter equalised before Ryan Fitzhugh gave them a 2-1 win four minutes from time. Josh Smith and Shane Buckerfield were on target for Swanwick as their 2-0 win made it three defeats for hosts Mickleover RBL. A single goal settled Clay Cross’s visit to Linby Colliery, Josh Parfitt scoring the winner for the Millers two minutes before half time in front of a crowd of 108. Linby included 16 year old Tom Hilton, the youngest player to represent the club’s senior side for over 60 years.

The North Notts derby between Harworth Colliery and Retford United attracted 154 to Scrooby Road to see a fiery contest between two of the North Division favourites. Retford struck as early as the 4th minute, Ryan Smythe giving them a dream start. Harworth equalised through Ainsley Finney and after having a player sent off took all three points with a Leigh Warriner strike from the edge of the area. The place for goals was Moorends where Thorne Colliery and Renishaw Rangers produced eight goals between them, Thorne taking the points 5-3. Darren Bird got two for the home team with Trevor Hindson, Kirk Frost and Bradley Sparrow also finding the net, Rangers replying through Luke Manlove (2) and Ryan Bates. Dinnington Town recorded their third win and third clean sheet of the new season as they saw off Phoenix by three clear goals. Scorers for Dinnington were Joe Byron with two and Bradley Sedgwick. Newark Town also made it three from three but it was a close run thing at AFC Bentley, both sides spurning chances before Lewis Chambers’ 61st minute shot on the turn settled it in favour of the Blues. Staveley Reserves pulled off a notable 3-2 win at Crowle Colts thanks to goals from Brad Jones, Jake Gascoigne and Trent Jules, with Tom Finnigan and Kyle Bennett scoring for Crowle. Askern were 2-0 winners over Appleby Frodingham, Jake Tooman scoring in the 13th and 77th minutes, a result that sent Frod to their third successive defeat.

In the Macron Store Stoke Division One North Boynton Sports hit six against a young Harworth Colliery outfit. Connor Gregg took his tally to five in two games with a hat trick, Jack Bennett, Ryan Hall and Callam Littlejohn also on the scoresheet, Harworth getting two of their own, Richie Matthews and Ben Temporal finding the net. St Joseph’s Rockware of Worksop got their CML career off to a winning start, Daniel Wiltshire scoring twice and Ben Brown once in their 3-0 victory at Chesterfield Town. Selston’s debut didn’t go so well as they went down 5-0 at Retford United, George White getting a hat trick, Michael Wibberley scoring the other two.

FC Sez’s explosive start to the season suffered a setback as they went down 4-1 to a young Mickleover Sports side in Division One South. The Derby side won with goals from Tomas Junek, Jude Ayetine, Jiri Boula and Kyle Clarke, Declan Smith with FC Sez’s goal. Sports Gateway also made it two, defeating Holbrook Sports 3-1, Calrick Dunkley with a brace and Kieron Hobday with the other, Labrada Domini replying for Sports. Holbrook St Michaels spoilt Ripley Town’s first match as they eased to a 5-0 win with goals from Morgan Holloway, Ben Litchfield, Jordan Whitehead, Immanuel Freeman and Adam Pynegar. Long Eaton Community also got five at Woodhouse Colts with Josh Lawe’s hat trick added to by Aboo Younis and James Gale, Woodhouse getting one back through Jamie Royle.