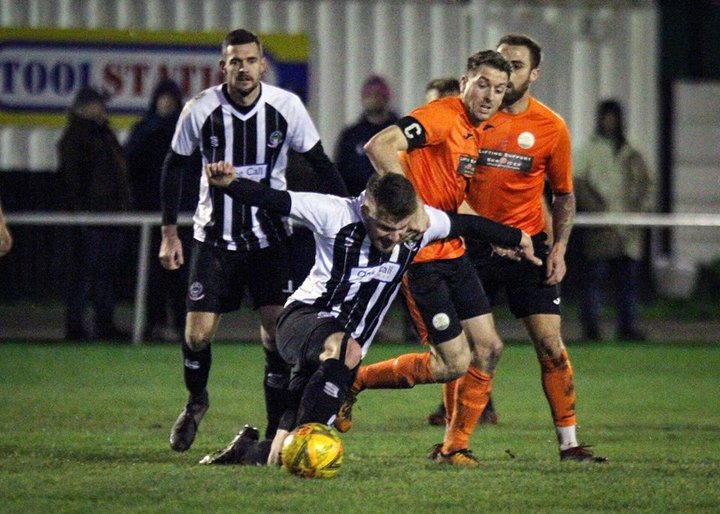 All the News, Results and (most of) the scorers from this afternoon's matches

On Friday night a crowd of 141 saw a hotly contested Bassetlaw derby with Retford United coming out on top 4-3 against Harworth Colliery. Ainsley Finney put the visitors ahead on 26 minutes but two goals in three minutes from Mark West and Adam Daughtrey put Retford ahead by half time. Finney’s second restored parity on the hour but Dean Conway put Retford back in front on 69 minutes, Alex Wonham extending the lead ten minutes later. Lee Naughton did pull one back a minute from time for Harworth but it wasn’t enough for a share of the points.

Elsewhere in the Black Dragon Badges North division leaders Newark Town went six points clear at the top after a 5-0 win at Phoenix. Rhys Lewis scored in the 19th and 32nd minutes to give the Blues a comfortable lead at the break. Dom Sibilski got a third ten minutes into the second half with Kieran Job and Tyler Martin rounding off a convincing victory. After taking a point at Harworth last Saturday, Renishaw Rangers were brought back to earth as they went down 4-0 at home to an improving Thorne Colliery. On target for Thorne were Henry Tyers, Nick Howcroft, Callum Wootton and Oli Beaglehole. Sutton Rovers made it two wins from three with a 2-1 win against AFC Bentley. The visitors went ahead with an own goal on 22 minutes and it wasn’t until the 50th minute that Callum Stockton levelled. The game was settled four minutes from the end when Joel McCabe got Sutton’s winner. Tom Johnson scored twice as Collingham deepened the gloom at Appleby Frodingham with a 4-1 win. Johnson struck in the 32nd minute, Gareth Davies stretching the lead five minutes later. Johnson got his second on 68 minutes, Aiden Cooke scoring for Frod with 76 played before Alex Oliver brought an end to the scoring with three minutes remaining

The South division was again worst hit by postponements with four of the seven scheduled games going ahead. Blidworth Welfare picked up their first point since the end of September with a 3-3 draw against Mickleover RBL. In a game of two halves Blidworth built up a 3-0 lead by half time, Tony Edwards scoring twice and Jonathan Rowbotham also finding the net. Mickleover fought back after the break and took a share of the points with goals from Owen Gorman, Henry Birkinshaw and Gareth Hague. Clay Cross Town regained top spot after a 3-0 defeat of Teversal Reserves, goals from Josh Parfitt, Ryan Ordidge and Billy Whitehead putting the Millers a point ahead of Linby Colliery. As their season reached the halfway mark Linby reached the dizzy heights of second place following a single goal victory against Rowsley 86 with Tom Hilton’s 17th minute free kick separating the teams. The bottom two met at the Mease, with Hilton Harriers coming out on top as they saw off Underwood Villa 2-0. Goals from Karl Chadfield in the 5th minute and Ben Sanderson five minutes into the second half lifted the Harriers to three from the foot of the table.

The Buckingham Insurance League Cup inches its way towards the quarter finals with Pinxton the latest team to progress following a 2-1 win over Crowle Colts. Brad Foley’s goal put the home side ahead in the first half, Nathan Benger doubling the lead after coming on as a half time sub. Ryan Bonser pulled one back for Crowle and despite being reduced to ten men for the last half hour Pinxton held on.

Boynton Sports and St Joseph’s Rockware are neck and neck at the top of the Macron Store Stoke Division One North. Boynton hold top spot on goal difference after a 5-2 win over Retford United. Conor Gregg got a hat trick with Jack Bennett and Ryan Hall also on the scoresheet for the hosts. St Joseph’s maintained their perfect record with a hard-won 3-2 victory over a skilful Nottingham side. Goals for the home side came from Scott Wesley, Chris Lovett and Kyle Wesley while Nottingham’s scorers were Mitchell Tait and Rico Spencer. Wakefield got their first league win of the season as they won 3-2 at Chesterfield Town. Amos Kebaye (2) and Jean Claude Ngoyi were Wakefield’s matchwinners, Solly Limb getting two for the hosts. Another team celebrating their first win were Selston, playing their first league game since mid-September, Chris Neilson with the decisive goal at Harworth Colliery.

In Division One South Mickleover Sports got the better of Long Eaton Community for the second week running as they won 4-1 on the new 4G pitch at Grange Park. Mickleover’s matchwinners were Surf Tefera, Tom Eccleshall, Aaron Hayer and Keir Sheppard. Sports lie in second place behind Wirksworth Ivanhoe, who beat Holbrook Sports 5-2. Matt Leask with a hat trick, Ryan Marchington and Lucas Brough won it for the home team while Lee Hillier got both for Holbrook, missing out on a hat trick after a 93rd minute penalty miss. A Sam McElroy double saw FC Sez to a 2-1 defeat of Heanor Town for whom Josh Clifton was the scorer.
There was one match in the Steel Beams Derby President’s Cup, Epworth Town Colts winning 4-0 against Woodhouse Colts, the goals coming from Harrison Coley (2), Matt Fowler and Dan Taylor.

Artificial grass to the rescue again as Swanwick took to the field for the first time in nine weeks as the long running saga of their Derbyshire Divisional Cup South game against Derby Rolls Royce finally came to an end, the Swans going through 2-0 with Shane Whitmore and Mark Green remembering how to find the net !!

 The Saturday Roundup - December 21st Yet again the weather is the winner-here is the news of what survived.