The Saturday Roundup for August 28th 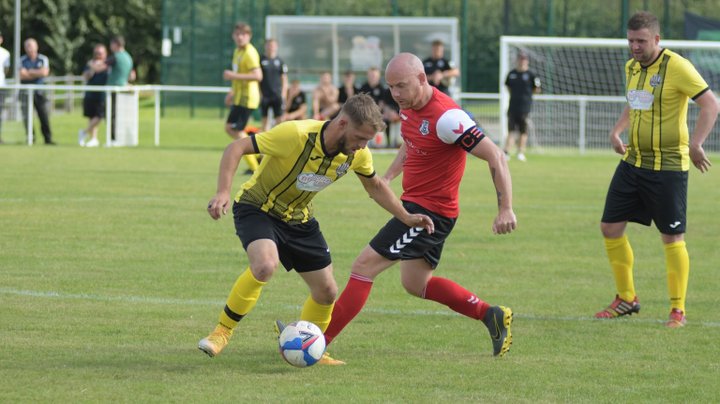 There were two Friday night matches to start the weekend’s entertainment with widely differing results. In the Premier North, Staveley Reserves picked up their first win of the season with a 6-1 defeat of an Askern Miners side playing their seventh game of the season. Regan Edridge and Lewis Price scored in the first half, Dustyn Grierson made it three before the visitors pulled one back through Alex Irwin. Jamie Bonsor and a late double from Ryan Damms brought up the half dozen. A bumper crowd of 374 turned out for the local derby between Pinxton and South Normanton, the match finishing goalless, Pinxton drawing for the fourth time in their five matches so far.

Something had to give in the North division’s match of the day, and it was Retford United who lost their 100% record while Thorne Colliery continued their winning run. Retford went ahead on 7 minutes with a Bruno Holden goal but Thorne took the points as Evan Fortune-West equalised in the 37th minute, an own goal four minutes later proving decisive. Dinnington Town made it five wins in a row as they beat bottom side AFC Phoenix 4-0 with a goal apiece for Brandon Ashmore, Jordan Turner, Liam Bryan and Josh Baxter. Newark Town moved up to fourth with a convincing 6-1 defeat of Sutton Rovers. Two goals in two minutes set the home side up, Nathan Arnold and Lewis Chambers netting in the 16th and 18th minutes. Arnold got his second after 33 minutes, Chambers three minutes before half time. Another two goals on the hour mark saw Chambers and Jordan Buckthorpe complete the half dozen before Adi Parker’s consolation goal ten minutes from the end. It was the same score at Kiveton Miners Welfare, but this time it was the visitors, Harworth Colliery, who finished on top. Charlie Baird got a hat trick with one each for Ainsley Finney, Greg Archer and Rio Allen, Kiveton’s goal came from Aidan Nagi. Glapwell made the long trip to Crowle Colts, Returning on the right side of a 2-1 scoreline. Ryan Bonser gave Crowle the lead on 18 minutes but Theo Jarrod levelled the scores with 29 played. The all-important decider came from Chaz Bradwell in the 76th minute. Two goals apiece for Nathan Lovell and Connor Peace were the inspiration for Dearne & District’s 4-2 win against Sheffield Reserves, for whom Mackenzie Ross and Gabriel Oloko were on target. AFC Bentley drew 2-2 with St Josephs Rockware. Zack King and Shaun Carrington put Bentley two up by the 21st minute but St Josephs fought back to take a point with Jayden Thackray’s 32nd minute goal being added to by Danny Wilson five minutes later.

In the Premier South Division another team to surrender their unbeaten record were Mickleover Reserves who went down at home to a single goal from Long Eaton Community’s Keaton Grainger. Blidworth Welfare top the table, they defeated Holbrook St Michaels 2-1, all the goals coming in the first half. Adie Harris gave Blidworth the lead which was doubled by Tristan Burrell before Ben Cartwright got one back for Holbrook. It was a similar story at Mickleover RBL where again all the scoring was over by the interval as the home side drew 2-2 with Linby Colliery. A rush of goals midway through the first half saw Jordan Lee put the Legion ahead before Sean Craven and Rory Smith turned the game round, the three goals coming in the space of three minutes. The final goal which gave Mickleover a point came from Sam Vickers four minutes before the interval. Ashland Rovers and Wirksworth Ivanhoe also shared the spoils in another 2-2 draw at Kingsway Park. Connor Barnes and Mark Summers scored for Ashland with Wirksworth replying with goals from Dom and Tom Mellor. Nottingham pulled off a 4-3 win away at Rowsley 86. Nottingham’s scorers were Mustapha Leone who scored on 14 and 28 minutes, Elie Muendakani Tshilumba (36) and Jahnai Raynor (42 minutes). Rowsley’s scorers were Tim baker with two and Jordan Watts. A Dom Witton penalty settled the gane between Mansfield Hosiery Mills and Teversal Reserves in the Millers Favour.

Only half a dozen games survived in the Macron Store Nottingham Division One. In the north Bottesford Town won 5-1 against Dearne & District with the goals shared between Brandon McGlone, Rio Jacomb, Ben Kirk, Brad Croxall and Rory McGuire .

Two matches in the Central Division where Kilburn drew 2-2 with Woodhouse Colts, Tom Sheffield and Jordan Mighty’s goals for Kilburn being cancelled out by Joss Kowalski and Alex Hanson. Holbrook St Michaels came from two down to beat South Normanton 4-2. The Shiners went in front thanks to Marshall Smith and Troy Greveson but went down to goals from Ben Litchfield, Will Cope, Kyle Curzon and an own goal.

In the south Derby Singh Brothers kept a second clean sheet as they won 5-0 at Castle Donington. There was a hat trick for Moussa Cisse and one each for Khaleeq Shaffique and Scott Parkinson. Jack Goodband and Ben Cooke were Melbourne Dynamo’s scorers in a 2-2 draw with PMG Academy while the game between Linby Colliery and Carlton Town ended goalless.