The Saturday Roundup for May 8th 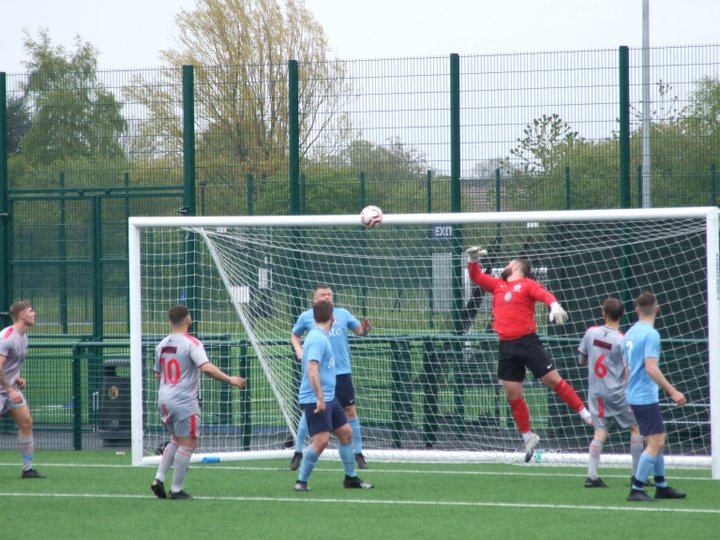 All the league and cup action from the past week.

Just two midweek matches this midweek. On Tuesday the top two in Division One South faced each other at Cockshut Lane, Melbourne Dynamo suffering their third successive defeat, going down 3-0 to visitors Long Eaton Community. Charlie Wilde opened the scoring on 29 minutes with the other goals coming late on through Andrew Tsolakis (83 minutes) and Klein Gwenero who got the third in added time.
Wednesday night saw AFC Phoenix suffer a home defeat to AFC Bentley in the Chairman’s Cup, the match ending 3-1. Matthew Hughes and Brad Sykes gave the visitors a half time lead which was added to by Luke Flanagan with Chris Kabeya pulling one back for Phoenix.

The fourth round of matches in the Chairman’s Cup resulted in three draws in the four ties. The only positive result came at Underwood Villa where the home side went down 3-1 to Clay Cross Town, who now qualify for the knock out stages. Parnell Smith gave the Villa a 9th minute lead but were soon pegged back by a Josh Parfitt goal eight minutes later. Ryan Hadley put the Millers in front three minutes from the interval, the match finally settled by a Callam Lytham goal in the 88th minute. Crowle Colts snatched a stoppage time goal to give them a 2-2 draw at home to AFC Bentley. Joe Simpson scored in the minute to put them ahead, but Shaun Carrington levelled a minute later. Carrington then put Bentley what looked set to be a winning lead on the hour, but Crowle got out of jail with a Danny Barrowcliffe equaliser in the 91st minute. It was the same score at Newark Town where the home side also scored late in the game to draw with Retford United. The Badgers scored first in the 19th minute through Sam Foulds, Mitch Griffiths putting the sides level with 27 played. Jonathan Fusco restored Retford’s lead eight minutes into the second half but they were denied the win thanks to Joe Braithwaite’s 88th minute header. Holbrook St Michaels and Rowsley 86 shared six goals at Holbrook Park with Ben Cartwright (2) and Morgan Holloway on target for the home side and Andy Roome, Jason Broome and Josh Henshaw replying for Rowsley.

In Division One North 780 JLC made it 14 goals in their last three matches with a 6-2 home win against Newark Town. Olly Bradbury led the way with a hat trick with Cameron Barrows, Joel Chapman and Josh Law also on the scoresheet while Ellis Nicholson scored twice for Newark. Bessacarr travelled to Ollerton Town, returning home with the points following a 4-1 win. Two goals here for Beau Bailey and one each for James Bytheway and Stan Gilkes. Thorne Colliery beat Harworth Colliery 3-1 at Moorends thanks to goals from George Cowan, Louis Thwaite and George Downing, Mick Wibberley scoring for the fifth consecutive game for Harworth.

The local derby between Wirksworth Ivanhoe and Cromford and Wirksworth Town went the way of Ivanhoe, Tom Mellor scoring the only goal of the game. Woodhouse Colts returned to form with a comprehensive 6-0 defeat of Holbrook St Michaels. There were goals for Ryan Clarke, Max Radford, Jamie Royle, Liam Theakstone and Charles Simpkins with an own goal completing the half dozen.

Four points in their final four matches will guarantee Long Eaton Community the Division One South title following their 5-! win at Selston. James Taylor hit a hat trick, Josh Lawe and Marley Fearon adding one apiece while Grant Hackett netted for Selston. Ripley Town were 2-1 winners at PMG. Jason Barrett put the visitors one up in the 10th minute, Hemin Mahmoodi levelling on the half hour, Jake Brown securing the points for Ripley on 70 minutes.