The Saturday Roundup for September 4th 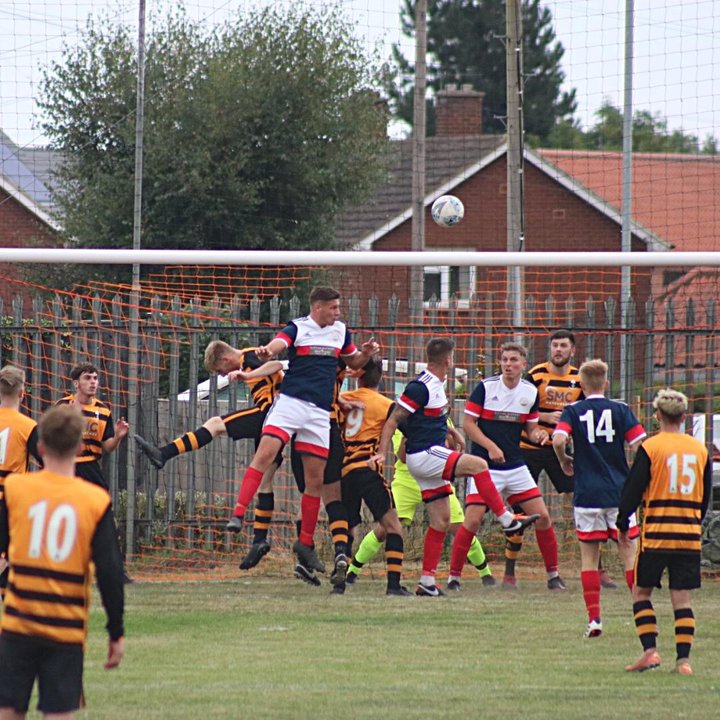 All the day's action in the Central Midlands

The Friday night game this week saw Kiveton Miners Welfare travel to Askern Miners and return with maximum points following a 4-1 win. The scores were level at half time, Louie Mattimore’s 26th minute goal for Kiveton being equalised by Alex Irwin ten minutes later. The turning point came on 54 minutes when the home side were reduced to ten men, Kiveton taking full advantage with further goals from Ryan Hall on the hour, Howard Wood in the 78th minute and Sam Thompson four minutes from time.

Saturday’s games in the Premier North Division saw one or two unexpected results. Probably the most surprising was at Moorends where AFC Phoenix, still searching for their first point of the season, must have been shattered to go down to an 88th minute penalty at table-topping Thorne Colliery scored by Shay Evans Booth. One 100% record did go as Clay Cross Town visited Glapwell, who celebrated their opening home game with a 2-0 win with two early goals from Owen Ryan on 12 minutes and Ben Copestake four minutes later. No such trouble for Retford United who hit the goal trail with a 7-1 defeat of Sheffield Reserves. Retford were two up at the break with goals from Aaron Fell and Mark West and went further ahead with an Igor Mlynarski goal before Mackenzie Ross pulled one back, before the home turned up the heat with two from Dean Conway, a second for West and a late final goal from Brandon Kane. Staveley Reserves pushed Newark Town all the way before going down 4-3 at the YMCA. Nathan Arnold opened the scoring for Newark in the 12th minute but most of the action came in the second half. Matty Clarke doubling the lead in the 51st minute before George Wilkinson got one for Staveley four minutes later. Mark Faflik and Elliott Burrell added further goals for the home side with Regan Edridge and Reece Clegg making sure the result was in doubt until the final whistle. All the goals came in the first half as AFC Bentley won the local derby with Sutton Rovers 3-1. A 14th minute Zack King penalty put Bentley in front with Brad Sykes getting a second six minutes later. Luke Webb gave Sutton hope in the 41st minute but Josh Bowkett’s strike a minute before the interval won the points for the hosts. Collingham’s home game against Harworth Colliery was decided in the visitors’ favour by a 48th minute Charlie Baird goal.

In the Premier South division Blidworth remain at the top after a 6-2 win at Teversal Reserves. Ben Rogers opened the scoring on the half hour for Blidworth, but again the goals poured in after the break as Tristan Burrell’s two for Blidworth were added to by Luke Bacon, Lee Townsend and Adie Harris with John Higgingbottom and Craig Newton replying for Tevie. Mickleover Reserves also hit half a dozen as they beat Holbrook St Michaels 6-1. There were two for George Atwal and Larell King and one each from Will Robinson and Jude Ayetine while Alister Broughton got a consolation for Holbrook. Ashland Rovers lost their unbeaten record as Pinxton ended their run of draws with a 3-1 win. Jay Cooper scored twice for Pinxton and Rob Fretwell got one from the penalty spot while Alex Paterson netted for Ashland. South Normanton are still seeking their first win after going down 4-2 at Linby Colliery. Linby won with goals from Josh Hunt (2), Ben Jones and Sean Craven with Henry Brooks getting both for the Shiners. There was a first win of the season for Hilton Harriers who beat Wirksworth Ivanhoe 2-1. Arron Millinchip gave Hilton the lead after 15 minutes with Joshua Warren getting the second on the hour, Tobi Wilkinson getting one back for Ivanhoe seven minutes from time. It was the same scoreline at Mickleover RBL where the home side beat Long Eaton Community with goals from Daniel Minto and Jordan Lee. It also finished 2-1 at the Fieldings where Rowsley 86 had the edge over Mansfield Hosiery Mills. A double from Logan Toplis gave Rowsley the points with Jacob Reeve on target for the Millers.

In the Macron Store Nottingham Division One North, 780 JLC beat Bessacarr 2-1 thanks to goals from Corie Woodcock and Nathan Watson, Jordan Wilkinson getting one for the visitors. Dearne & District had a 5-3 win against Newark Town. Scorers for the winners were George Williams (2), Kye Sinclair, Regan Wild and Mark Schofield, Newark’s goals coming from Ruben Diaz (2) and an own goal. It was all square at Walesby Lane as Ollerton Town and Retford FC shared six goals. Kieran Taylor got a hat trick for Retford with Tomi Abere (2) and Teffany Mendes finding the net for Ollerton.

In the Central Division a Baillie Hajman goal was enough to give Woodhouse Colts the points against Cromford & Wirksworth Town. Bakewell Town came back from South Normanton with a 5-2 win under their belts thanks to Stu Baker and Alex Moth who both twice and one from Freddie Hatcher, the home side’s goals coming from Troy Greveson and Daniel Harcup. Blidworth Welfare beat Kilburn 4-2 with a goal apiece for Nathan Hunt, George Dyson, Alex Neilson and Kieran Grant, Kilburn replying through Jack Archer and Jordan Mighty. Holbrook St Michaels were 3-1 winners against Mansfield Hosiery Mills, their goals scored by Kyle Curzon, Will Cope and Jordan Samuel, the Millers registering their first goal of the season by Callum Leslie.

Three games in Division One South saw PMG Academy win 2-0 against Heanor Town, the scorers Daniel Adifeh and Musa Jawara, while Ben Cooke, James Smith, Matt Savage, Harry Foxon and an own goal inspired Melbourne Dynamo’s 5-1 defeat of Linby Colliery. A better afternoon for Castle Donington who picked up their first CML points as a 55th minute goal from sub Jordan Davies proved decisive in their game at Ripley Town.

In the Presidents Cup Derby Singh Brothers beat Harworth Colliery 4-0, Moussa Cisse, Simeon Lawrence, Kishan Patel and Albashir Kuri the scorers, while in the Lincolnshire Junior Cup, Crowle Colts demolished Deeping United Reserves 12-0. Billy Ball led the way with four, there were hat tricks for Louis Scott and Kurt Robinson and one each from Josh Simpson and Ryan Bonser.