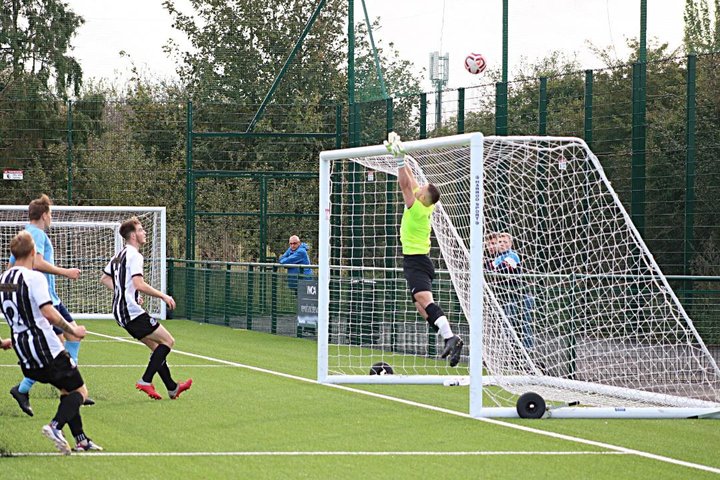 Non-League Day brought the crowds out, several clubs recording higher than average attendances. Highlight of the day was at Clay Cross where the home side won through to the second round of the FA Vase by beating Leicester Senior League team Cottesmore Amateurs 3-1 in front of a crowd of 220. Josh Scully put the Millers in front on 12 minutes, getting a second midway through the second half to restore the lead after the visitors had levelled on the hour. Nerves were finally settled in the fourth minute of stoppage time when Grant Mitchell put the result beyond doubt.

The weekend’s entertainment began at Wharf Road on Friday night as Pinxton temporarily moved into second place in the Black Dragon Badges South Division with a comprehensive 6-0 win over basement team Mickleover RBL. The first half produced just one goal, Sion Green breaking the deadlock, but Pinxton upped the pace in the second period with Brad Foley, John Fones and Tom Ellis scoring before Green struck twice to complete his hat trick.
Sherwood Colliery Reserves replaced them next day as they retained their unbeaten record by beating Underwood Villa 4-2 at Bracken Park. Max Curzon scored twice for the Wood with Jordan Ingram and Luke Bacon also on target, Villa replying with goals from Ben Sandhu and Kye Hall. Holbrook St Michaels moved into the top four as they inflicted a 2-0 home defeat on Linby Colliery. Matt Harris got the first on 23 minutes with Joe Brumby’s 70th minute goal tying up the points. Swanwick got the better of Teversal Reserves, Shane Whitmore and Guy Wilding with the goals while Robbie Bestwick got one for Tevie. There was a morale-boosting win for Arnold Town who put four past Ashland Rovers without reply. Rory Smith hit the net on 17 and 25 minutes, Ashley Foster got the third two minutes into the second half with Matt Fowler rounding off the scoring in the 78th minute. Mansfield Hosiery Mills ended Blidworth Welfare’s unbeaten run as they recorded a 3-1 win at the Fieldings. Pete Stubley’s opener for Blidworth was equalised by James Parrish. Thomas Clarke scoring twice for the Millers in the second half.

In the North division leaders Newark Town were held to a draw by Retford United with 138 in attendance. Newark took an 8th minute lead with a 30 yard volley from Lewis Chambers, Retford equalising with a 36th minute penalty converted by Zach Casburn. Staveley Reserves had a 3-0 win at Collingham. All three goals came in the first half, Kane Snell striking early on with goals in the 10th and 15th minutes, James Norman getting a third with 32 minutes played. Dronfield Town Reserves reached the top four as they won 3-1 at AFC Bentley. Scores for Dronfield were Tim Clarke, Jamie Willis and Tom Fairweather with Brad Vann on the scoresheet for Bentley. Two goals from Darren Bird were sufficient to give Thorne Colliery a 2-1 win at Askern, where all the goals came in the first ten minutes. Bird’s first came in the opening minute with the second on 8 minutes, Tony Hattersley replying for Askern two minutes later. The bottom two met at Brumby Hall, Appleby Frodingham and Sutton Rovers sharing four goals. Callum Stockton put Sutton in front in the 27th minute but Harry Haynes (50) and Danny Own (67 minutes) gave Frod the lead, Joe Palmer giving Sutton a point ten minutes from the end. It was the same score between Crowle Colts and Renishaw Rangers, with Zak Shipman and Joe Simpson’s goals for Crowle being cancelled out by Ryan Hancock and Nathan Jessop.

Nottingham FC maintained their position at the top of the Macron Store Stoke Division One North with an emphatic 4-0 win at Harworth Colliery. Scorers for Nottingham were Kailum Richards, Tarell Peck, Mo Sillah and Seke Spence. Epworth Town Colts saw their 100% league record disappear in the dying minutes against Chesterfield Town. Leading by goals from Dan Taylor and James Bingham, Epworth were undone by goals in the 89th and 91st minutes by Lee Naughton, forcing a 2-2 draw. St Josephs Rockware kept their own perfect record intact with a 7-1 defeat of Linby Colliery. Tom Mullen and Ben Brown got two apiece with the other goals coming from Dan Wiltshire, Danny Scott and Sam Baird. Another good crowd here with 86 in attendance. The Game between Retford United and Nottingham Education was abandoned towards the end of the first half following an injury to a player who we hope makes a full recovery.

Two more sides with 100% records met in Division One South and it was Mickleover Sports who tasted defeat for the first time as they were beaten 2-1 by Cromford and Wirksworth Town, the goals coming from Josh Middleton and Tom Savage. FC Sez were beaten 3-1 at home by Long Eaton Community whose scorers were Josh Lawe, James Taylor and Bartosz Korzeniewski, Emmet Edwards with one for FC Sez.

It was Derbyshire Divisional Cup day with several of our clubs involved. Wirksworth Ivanhoe were the only winners in the North competition as they put out Blazing Rag 4-1 thanks to goals by Dan Watson, who scored two, Lucas Brough and Lewis Higton. Rowsley 86 went down 4-2 at Whaley Bridge Athletic, scorers here were Noah Evans and Tim Baker. Bakewell Town suffered a similar fate at Tintwistle Athletic losing 5-3, Aaron Maund, Ben Rach and Jonathan Hutchinson with the goals. In the South Hilton Harriers were too strong for Ripley Town winning 6-2. Max Bulmer scored a hat trick for Hilton, Callum Wilson added two with Scott Abbey also on target. Brian Cumberland and Will Ungless-Brookes replied for Ripley.