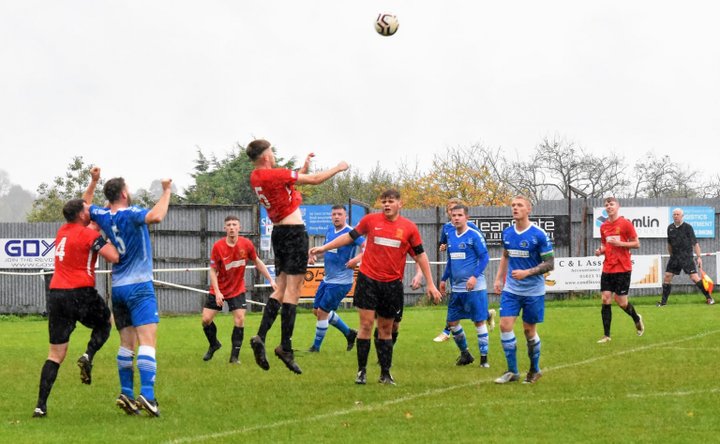 The pandemic struck at the heart of the second round fixtures in the Buckingham Insurance League Cup. With travel in or out of South Yorkshire prohibited for Step 7 sides, the weekend’s 16 scheduled matches were reduced to just eight which took place in dreadful conditions

The leaders in the Premier South and Division One South divisions came together at Blidworth with the home team shading the match with Melbourne Dynamo 3-2. Melbourne took the lead with a James Smith goal, Lee Townsend equalising before half time. Ryan Martin gave the home side the lead before Carl Alsop levelled, Blidworth’s winner coming from Paul Revuelta. Individual top scorer of the day was Nottingham FC’s Blaize Hall who scored all four of his sides goals as they beat Underwood Villa 4-2 after extra time, The game was tied at 2-2 after 90 minutes, Hall striking twice in the extra half hour. Underwood’s goals came from Carl Spencer and Danny Widdowson. Goals from Tom Moulds and Danny Barrowcliffe were enough to give Crowle Colts a 2-1 win over Sherwood Colliery Reserves for whom Tyrone Macaskill was the scorer. Heanor Town Reserves made the long journey to Scunthorpe to face 780 JLC and made it worthwhile as they returned with a 5-3 win. Tom Garner scored a hat trick for the hosts with Heanor’s goals shared between Josh Melville, Milan Vrzal, Jack Desmond, Fortunate Sithole and Alex Lynam. A Mark West hat trick took Retford United to round three as they won 3-1 at Cromford & Wirksworth Town. West opened the scoring on 10 minutes, Toby Howard equalising with a penalty on the stroke of half time. West settled the tie with two more goal in the last ten minutes. The tie between Clifton Development and Wirksworth Ivanhoe was settled from the penalty spot after the sides finished 2-2 after extra time. Ben Cooke got both for Clifton with Billy Lobley and Lewis Higton on target for the visitors before Clifton went through 4-3 on penalties. Newark Town visited Woodhouse Colts, coming away on the right side of a 5-0 scoreline. Jonny Wiles put the Blues ahead on 14 minutes, Lewis Chambers doubling the lead five minutes later. Matthew Clarke made it three with 52 played, Chambers completing his hat trick with two in the final four minutes. St Josephs Rockware advanced by beating Holbrook St Michaels 4-0 with Tom Mullen’s double added to by Sam Jepson and Ben Brown.
The one match in the Premier South Division was won by Mansfield Hosiery Mills, a goal from debutant Vinny Hill giving the edge over hosts Teversal Reserves

Newark Town opened their account in Division One North winning 2-1 at neighbours Ollerton Town, Tom Perkins with both goals while Matthew Hubbard netted for Ollerton.

In Division One Central Steven Radzinski and Henry Brooks were South Normanton Athletic’s matchwinners as they won 2-1 at Holbrook St Michaels whose reply came from Sam Smithurst. The game between Kilburn and Pinxton was abandoned after 78 minutes

Ripley Town rebounded from last Saturday’s Division One South defeat to win 4-1 against PMG Academy with goals from Micky Dunne who got two, Alex Crossley and Jack Brown, with Lamin Mannee replying for PMG.

One match in the President’s Cup saw Linby Colliery and Bakewell Town draw 2-2 at Church Lane. Travis Shooter gave Linby the lead, Jamie Carrington equalising. Rob Littlewood put Bakewell in front in the second half before Tom Coupe came up with a late point saver.