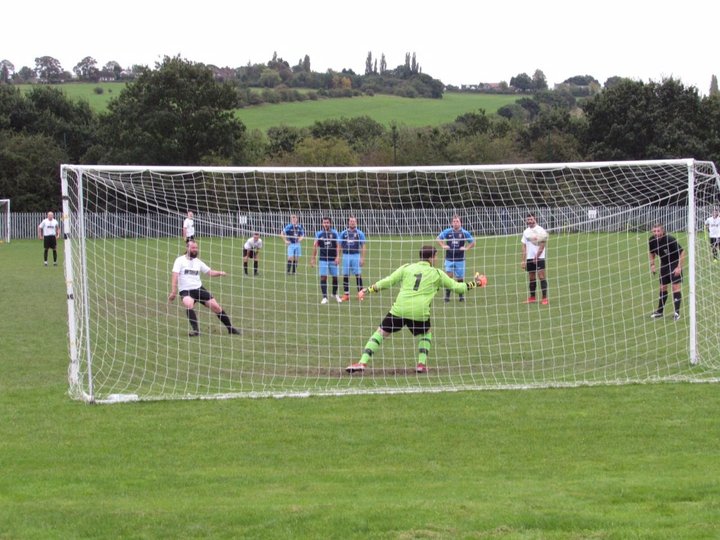 All the results and scorers from Saturday's league and cup games

The week’s rainfall failed to cause too much damage to Saturday’s fixtures with just five matches falling victim to the conditions.

Clay Cross Town are setting the pace in the Black Dragon Badges South division. They moved six points ahead of their pursuers with a 6-2 win over Swanwick at Mill Lane. Josh Parfitt struck in the 23rd minute with Billy Brooks getting a second ten minutes later before Henry Brooks put the Swans back in the running six minutes from half time. Parfitt grabbed his second a minute after the restart and Josh Scully increased the lead just before the hour. Brooks scored again for the visitors on 62 minutes but the Millers finished with a flourish, Scully and Grant Mitchell adding further goals in the dying minutes. Rowsley 86 had a convincing 7-0 result against Underwood Villa. Noah Evans got a hat trick with Jack Bradbury scoring twice and Aaron O’Neill and Andrew Boyack also on the scoresheet. The result lifts Rowsley to second place in the table. Holbrook Sports also remain unbeaten following a 4-2 defeat of Ashland Rovers at Kingsway Park. Jordan Lee scored in the first minute of the match, Chris Dring (20 mins) and Corey Bowler (33) giving Sports a healthy interval lead. Bowler’s second was followed by a double for Rangers’ sub Hayden Wharmby. Despite playing for an hour with ten men Linby Colliery took a point from a 1-1 draw with Sherwood Colliery Reserves. Leighton Platts put Linby ahead on 10 minutes, Max Curzon ensuring a share of the spoils for the wood with a goal after 62 minutes. Holbrook St Michaels were 3-1 winners against Mansfield Hosiery Mills. Ben Cartwright, Matt Harris and Joel Cain were the scorers for Holbrook, Liam McCarthy replying for the visitors. Finally there was a win for Mickleover RBL who beat fellow strugglers Arnold Town 5-3. Luke Thomas was the hero for the Legion with a hat trick, Connor Golden and Kai Hamilton also scoring while Greg Conn with two and Tom Coupe got Arnold’s goals.

Dinnington Town made it eight games without conceding a goal in the North Division but were fortunate to take the points against AFC Bentley, the Mason Barlow goal which divided the teams not arriving until the 89th minute. Dinnington now lie just two points behind leaders Newark Town, whose match at Renishaw was postponed. Retford United were 4-2 winners over Phoenix, both sides ending the match with ten men. Zack Casburn’s 19th minute opener for Retford was cancelled out just three minutes later by Keegan Hepplestone, Cory Goodwin putting the Badgers back in front six minutes before the break. Two goals in as many minutes from Ryan Smyth and Brandon Kane gave the hosts the upper hand, Adam Powell getting a second for Phoenix in the 83rd minute. Dronfield Town Reserves picked up a welcome three points with a 2-1 win at Collingham. It was the hosts who went in front on 12 minutes through Sean James but second half goals from Jimmy Savage and Mike Hunter ensured the points returned to Derbyshire. Thorne Colliery put a run of four defeats behind them with a morale-boosting one goal win over Staveley Reserves, Callum Sharp with the all-important goal.

In the Macron Store Stoke Division One North an incident-packed game saw Chesterfield Town beat Boynton Sports 3-2 in a game of three penalties. Cory burton put Chesterfield in front on 11 minutes, Lee Naughton increasing the advantage from the spot with 26 played. Josh Hemingway put away another penalty for Boynton six minutes before the interval, but the home side scored again just after the break thanks to an own goal. Boynton scored a second in added time again from the penalty spot, Jack Bennett doing the necessary. Travis Shooter was the day’s top individual scorer scoring all of Linby Colliery’s goals in a 4-2 win at Nottingham Education, who replied through Courtney Samuels and Lamin Manneh. There were more goals at St Joseph’s Rockware who were on the right side of a 5-3 scoreline against Wakefield. Matthew Button’s double was added to by Dan Fitzackerley, Andrew Guest and Matthew Smith for St Josephs with Wakefield’s goals coming from Noah Hammelberg, Lennard Okalo and Maniasse Kianea.

Just two of the six scheduled six matches in Division One South were completed with three postponements, while Ripley town’s match with Bakewell was abandoned after 7 minutes following a serious injury to a Ripley player to whom my best wishes for a full recovery are sent. The two remaining matches saw decisive home wins as Wirksworth Ivanhoe put five past Holbrook St Michaels to go top of the table. Jack Higton (2), Ryan Marchington, Dan Watson and Liam Sheldon were on target for Ivanhoe. Woodhouse Colts also donned their shooting boots to beat Borrowash Victoria 7-1. Scorers for Woodhouse were Jason Straw with two, Ryan Clarke, Jamie Royle, Wes O’Rourke, Max Radford and an own goal from Luke Dale, who also scored at the other end to for Borrowash.

Nottingham FC ended Mickleover Sports’ winning start to the season, beating them 4-1 in the Mansfield Lodge Hotel Division One Cup. Jamie Williamson, Rico Spencer, Blaze Hall and Ayleal Dill were Nottingham’s matchwinners with Kyle Clarke getting one back for Sports

Askern’ s winner in the West Riding FA Challenge Cup against Sowerby Bridge came in the first minute of the match, Simon Squire the scorer.

 Team of the Month for September Congratulations to Cromford & Wirksworth Town