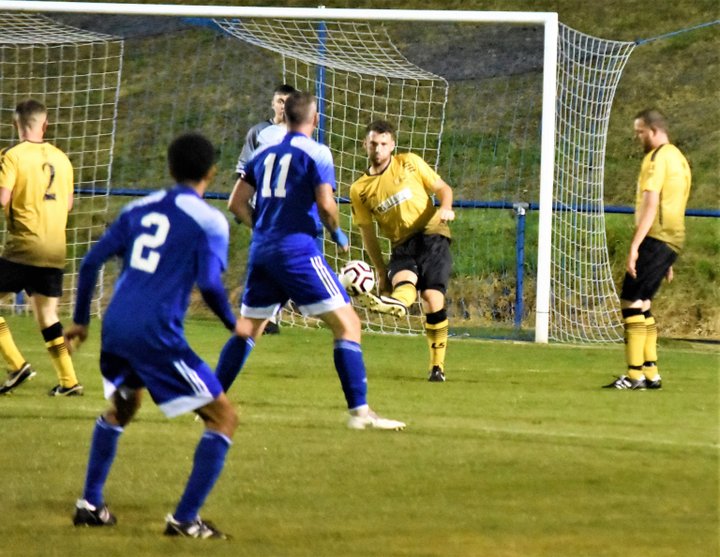 All the news, results and scorers from Saturday's matches

The first Friday fixture of the season was at Wharf Road, Pinxton temporarily moving to the top of the Premier South division with a 4-1 win over Mansfield Hosiery Mills. Jay Cooper scored twice for the home side, Tom Lewis and Luke Thomas also on target with Liam McCarthy responding for the Millers.

By ten to five they had been overtaken by Rowsley 86 and Blidworth Welfare who both extended their run of successive wins to four. Rowsley travelled to Holbrook Sports, coming away with a 3-2 win thanks to goals from Noah Evans, Conor Hiley and Pete Stubley, Holbrook’s scorers were Dan Peberdy and Lee Hillier. Blidworth’s visitors were Linby Colliery whose unbeaten run, stretching back to October 12th 2019, finally came to an end, the home side winning by two goals to nil. Tristan Burrell broke the deadlock on 39 minutes, Kai Wilson sealing the win in the second half. South Normanton Athletic inflcted a 3-0 defeat on Sherwood Colliery Reserves at Debdale Park, Sam Cox with two and Luke Smithson with the goals. Holbrook St Michaels and Nottingham FC shared the points and eight goals at Holbrook Park. Joe Brumby, Ali Broughton, Mani Freeman and Morgan Holloway shared the goals for the home side, Blaize Hall (2), Calrick Dunkley and Kashe Hall replying for Nottingham. Arnold Town opened their account at the fourth time of asking with a 3-1 win at home to Teversal Reserves. Charlie Hines opened the scoring for the hosts on 23 minutes, Kyle Bacon equalising six minutes later. Goals from Martin Bassey in the 69th minute and Liam Cunningham a minute from time ensured the points for the home side. Ashland Rovers also picked up their first points, again with a 3-1 win against Hilton Harriers. Goals from Danny Bircunshaw, Connor Barnes and a Ben Jones penalty proved decisive, Hilton, who missed a penalty, scored through Max Bulmer.

A brace of penalties from Josh Scully were enough for Clay Cross Town to maintain their winning start to the season against Thorne Colliery at Mill Lane. Scully beat the keeper in the 33rd and 51st minutes to keep the Millers record intact. Dinnington Town recovered from last Saturday’s slip with a 3-1 win at St Josephs Rockware. Cameron Evans, Jordan Turner and Jamie Hopkins were on target for Dinnington who also put one in their own net. Newark Town had o battle to break down a solid and well organised AFC Bentley defence before finally breaking through in the 85th minute, Zak Johnson the scorer. Harworth Colliery and Staveley Reserves failed to find the net at Scrooby Road, the match ending goalless. The place for goals was Boynton Sports where the hosts broke their scoring duck, scoring four times against who scored six in reply. A Jake Morrison hat trick, two from Alex Oliver and one for Archie Richardson did the trick for the visitors with Connor Gregg, Chris Howard, Liam Johnson and Matt Civil the scorers for Boynton. Sutton Rovers beat Crowle Colts 2-0, Callum Stockton’s 33rd minute goal separating the sides at the break, Ellis Pattinson making the game safe with 67 played.

There were plenty of goals in Division One North, Shirebrook Soldiers conceding double figures for the second successive week as they went down 11-0 at Thorne Colliery. Oliver Beaglehole led the scorers with five, Lewis Dale added a hat trick with Bradley Sparrow, Matthew Gains and Keenan Simpson adding one apiece. Sheffield FC also hit the goal trail as they hammered Ollerton Town 8-1. Jamie Yates opened the scoring in the first minute, Oliver Case equalising with only 4 minutes on the clock. From there it was one-way traffic as Sheffield increased their lead with goals from Benefit Ndlovu (2), Alex Wonham (2), Jaques Etia, Cameron Burgin and an own goal. Newark Town finally started their season but it wasn’t the best of starts as they went down 6-0 at Bessacarr whose scorers were Evan Fortune-West with a hat trick, Jordan Wilkinson who added two and James Bytheway. Glapwell made their debut at Hall Corner winning 2-1 against Harworth Colliery. Cory Burton and Charles Bradwell got one each for Glapwell, Michael Wibberley with one for the visitors.

Jack Goodband scored his third hat trick in successive matches as Melbourne Dynamo beat Clifton All Whites 5-0 in Division One South to extend their excellent start to the season, James Smith and Macauley Jones also on the scoresheet. Maximillian Jelewski’s 34th minute strike was enough to give PMG Academy the win at Heanor Town as was Travis Shooter’s goal for Linby Colliery against Ripley Town at Church Lane. At the other end of the scoring scale, Long Eaton Community racked up a dozen goals without reply at Underwood Villa. Ryan Bache led the way with four, Benni Wilson and Reece Widdowson each got a double with the others coming from Prince Mancinelli, James Gale, Andrew Tsolakis and Klein Gwenero.

Woodhouse Colts are top of Division One Central, as a Charles Simpkin hat trick and one from Ryan Clarke gave them a 4-0 win against Holbrook Sports. Kilburn were also four goal winners, Stu Birkett on 5 minutes, and Brad Wheldon (33) setting them on their way by the break, Stuart O’Toole’s goal on the hour and a late own goal finishing the game off. A Jack Madin first half goal combined with a penalty save from Tom Knifton-Smith enabled Bakewell Town to take the points at home to Pinxton. It was all square at Lees Lane between South Normanton and Holbrook St Michaels, Alex Mace scoring for the Shiners, Kieron Smith for the visitors.

The opening game in this season’s Presidents Cup saw Wirksworth Ivanhoe make a 143 mile round trip to Scunthorpe to face 780 JLC. The journey was in vain as they lost 3-2, JLC scoring through Alex Bradbury, Brad Teale and Tom Garner, Tom Mellor getting both for Ivanhoe.