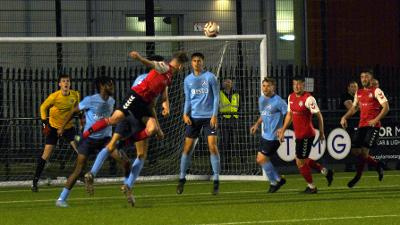 PMG Academy’s fantastic run in the Buckingham Insurance League Cup finally ended at the semi-finl stage against Linby Colliery at Pinxton. Linby won 3-2 and took the lead on 5 minutes with a Travis Shooter goal. They were soon in arrears however as Dembo Jatta scored from 25 yards on 9 minutes, getting a second five minutes later. PMG held their lead until the 67th minute when Caden McGrath levelled the scores, Elliott Jones grabbing the decider three minutes later. 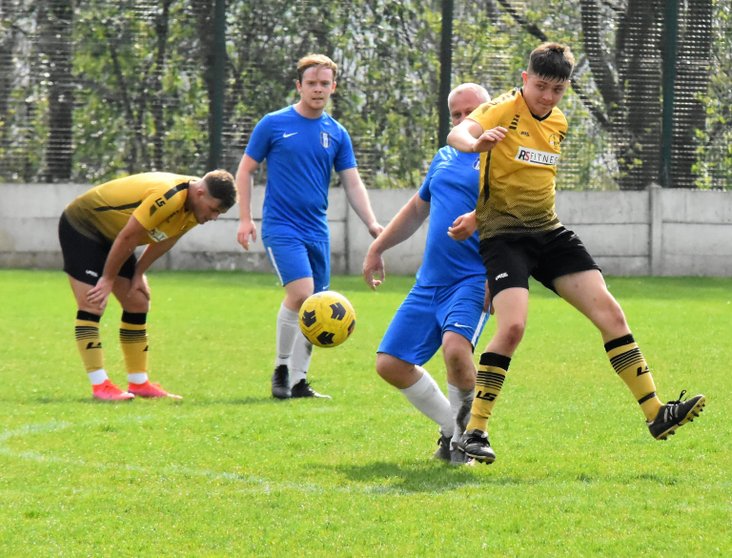 Two of the four teams fighting it out at the top of the Premier North were in action on Tuesday night, both picking up another three points. Thorne Colliery were pushed all the way by Kiveton Miners Welfare, a late Callum Verhees goal finally deciding things. Earlier Thorne had taken the lead through Lewis Scorer , Kiveton equalising scored with an own goal. It was more clearcut at Retford United who beat Dinnington Town 5-0 at Cannon Park, A Mason Barlow goal on 22 minutes separated the teams at half time, the second half proving more one-sided , Retford scoring four more as Mark West with two, Igor Mlynarski and an own goal saw Retford home. AFC Bentley picked up their first win in eight with a 2-0 defeat of AFC Phoenix, Zack King scoring in the first minute and again on 19 minutes to take the points. On Wednesday Newark Town boosted their challenge by beating Crowle Colts 5-0 at the YMCA. It took half an hour for James Gardner to open the scoring but a dominant second half showing resulted in a brace for Lewis Chambers, one for Chanju Mphande and a stoppage time fifth from Ainsley Finney.

In the Premier South division Pinxton suffered a blow in their quest for promotion as a goal from Jorge Knowles gave Holbrook St Michaels the points at Wharf Road. Wirksworth Ivanhoe had a good 3-2 win at an inconsistent Long Eaton Community. Two goals for Tom Mellor and one from Jack Higton proved conclusive, with the home side scoring from an own goal and pne for Reece Widdowson. A Henry Brooks double secured a 2-1 win for South Normanton Athletic against Nottingham FC who replied with a Rhys Ayetey goal. Mickleover RBL consolidated fourth position by beating Rowsley 86 3-0 the goals scored by Josh Wright, Durrell Berry and Jordan Lee from the penalty spot.

Woodhouse Colts completed their Division One Central season with a 2-1 win against Ashland Rovers thanks to a Kyle Chadburn double with Rob Whitmore getting one for Ashland.

On Friday night Blidworth Welfare rose to the top of the Premier South division after a 3-0 win over Ashland Rovers. Adie Harris put them in front in the first half and added a second before Ben Rogers rounded off the victory. Their position was confirmed as Mickleover Reserves lost 2-1 at neighbours RBL who won with goals from Liam Oliver and Owen Brader with George Atwal replying for the visitors. Long Eaton Community had a 3-2 win at Sherwood Colliery Reserves for whom Reece Widdowson, Destiny Conteh and Keaton Grainger scored, Liam West with both goals for the Wood. Mansfield Hosiery Mills lifted themselves out of the bottom three by beating Nottingham FC 2-1. Danny Harper and Elliott Nunn were the scorers, Mohammed Sillah getting one for Nottingham. Teversal Reserves shared six goals and the points with South Normanton. Tyrone Macaskill put Tevie in the lead in the second minute, Connor Mogford equalising two minutes later. The Shiners pulled away with two Henry Brooks goals but the home side launched a comeback, two goals in two minutes ensuing a point.

An important day in the battle at the top of the Premier North division saw Clay Cross clash at Mill Lane. In a game of few chances the Millers took the points with a goal on 15 minutes from Callam Lytham proving to be decisive. Retford United dropped points against a Sutton Rovers side containing eight under 18s and the manager in goal. The match ended in a 2-2 draw, Retford taking a 13th minute lead with an own goal, Callum Stockton levelling the scores with half an hour played. Retford again went in front, Mark West scoring in the 51st minute, Stockton getting his second ten minutes before the end. Newark Town took the opportunity to move to the top with a fortunate 3-1 win at Dearne & District, who deserved some reward from the game. Chanju Mphande put Newark in front on 24 minutes, Alex Lill getting an equaliser for Dearne on the half hour. Lewis Chambers regained the lead for the visitors in the 71st minute, scoring again from a highly controversial penalty awarded in added time. Glapwell began a run of seven home games with a 4-0 defeat of Sheffield Reserves. Nathan Hadley volleyed them into a 26th minute lead, Harry Denton doubling the advantage a minute before half time. Ben Copestake put the game out of reach with his 26th goal of the season on 72 minutes. Crowle Colts played their last home game of the season, winning 3-1 against SJR Worksop. The opening goal came from Jordan Spencer on 11 minutes, Ryan Bonser getting a second a couple of minutes before the break. Scott Wesley gave SJR hope with a 52nd minute strike, but that was short-lived as Ben Johnson got Crowle’s third a minute later. In a close game at Station Road, Collingham edged out AFC Phoenix with a single Will Hollingsworth goal.

In Division One North Bessacarr hammered Ollerton Town 10-0. Jordan Wilkinson starred with four goals, Liam Cooper and Harry Watkin scored two apiece with Henry Tyers and Ronin Herrington also finding the net. Harworth Colliery inflicted a 4-1 defeat on Thorne Colliery with Ryan Dickinson, Michael Wibberley and Harry Dunbar the scorers along with an own goal. Kirk Frost got one for Thorne. Retford FC won their first game since October with a 4-0 defeat of Dearne & District, Jonno Burton hitting a hat trick and Liam Bennett also on target.

Bakewell Town booked the last spot in the semi final lineup of the Presidents Cup after a 73 mile journey to 780 JLC The match ended in a 2-2 draw Ollie Bradbury scoring twice for 780, Stuart Baker and Aaron Maund with Bakewell’s goals. The penalty shootout went in favour of the visitors who won it 4-3.

 Central Midlands - Upcoming Cup Finals Details of the three Cup Finals over the next fortnight.

CML Weekly Roundup for April 9th  All the week's action in League and cup.