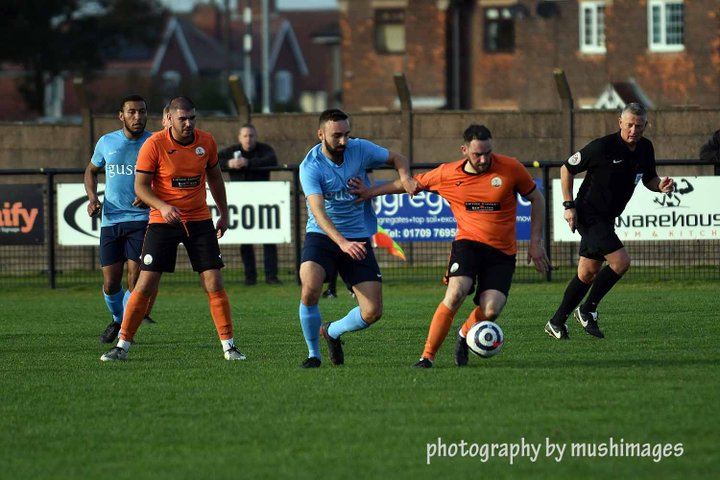 Thanks to John Mushet for the photo from Harworth Colliery's match with Newark Town this afternoon.

A quiet midweek saw just four matches played.
In the Premier North division Clay Cross moved up to third with a 6-0 win against Collingham. Lewis Macaskill opened the scoring with a quarter of an hour played, Grant Mitchell adding a second ten minutes later. Josh Parfitt and Tyrone Macaskill put the game beyond the visitors by half time, Lewis Macaskill and Mitchell both doubling their tallies in the second half. Harworth Colliery attracted 131 spectators to their clash with Dinnington Town who witnessed a win for the home side 2-1. Liam Arnold put them in front on 26 minutes and that’s how it stayed until the 72nd minute when Charlie Baird made it two. Jake Thompson pulled one back for Dinnington two minutes later but they couldn’t find the equaliser.

Friday night’s match in the Premier South division resulted in a 9-0 win for Sherwood Colliery Reserves over Ashland Rovers. There were two goals each for Brad Newby and Matt Hague with the others shared between Olly Ashton, Liam Theakstone, Charlie Hardwick, Nathan Clarke and Liam Carver.

Saturday saw new leaders of the division, Mickleover RBL taking advantage of defeats for Blidworth and Mickleover Reserves. The Legion won 6-1 at struggling Arnold Town, Sam Vickers setting them up with two goals in the first eight minutes, Liam Oliver made it three before half time with Lee Hillier scoring twice and Vickers completing his hat trick in the second half, Jack Horton with the Arnold goal. Blidworth were knocked off the top, going down 5-2 at home to a revitalised Hilton Harriers. Jack Thatcher was the star of the show, scoring four of Hilton’s goals with Max Bulmer getting the other one, Tristan Burrell and Tony Edwards with Blidworth’s reply. Mickleover Reserves lost 2-1 at Pinxton whose goals came from Rob Fretwell and Sion Green, Josh Satchwell pulling one back for Mickleover. Long Eaton Community travelled to Holbrook St Michaels, returning with all three points, goals from Klein Gwenero, Andrew Solakis and Daniel Odanayou sufficient to take them to a 3-2 win. Dylan Garnett and Regan Bickerton were Holbrook’s scorers. Linby Colliery put four past Teversal Reserves without reply, the goals coming from Caden McGrath, Ash Foster, Harley Shooter and an own goal. Pete Stubley put South Normanton Athletic in front after just 5 minutes, but it wasn’t enough to take a point from Nottingham FC who equalised through Jamie Williamson on 18 minutes and got the winner with a Martin Bassey goal with 15 minutes left. It was also 2-1 at Rowsley where the home side edged out Wirksworth Ivanhoe. Ryan Gackowski and Jack Stephenson were Rowsley’s matchwinners with Lucas Brough netting for the visitors.

In the Premier Division North the top two opened the gap a little on the chasing pack with narrow wins. Thorne Colliery were pushed all the way by Sutton Rovers at Moorends, a single Brad Johnstone goal on 32 minutes the deciding factor. Two goals in six first half minutes gave Newark Town a 2-1 win at Harworth Colliery. Elliott Burrell got the opener on 39 minutes, Lewis Chambers heading home number two on the stroke of half time. Harworth staged a late rally and were rewarded with a Sam Flower goal ten minutes from the end. Glapwell are making a habit of upsetting the fancied sides, a Ben Copestake hat trick undoing Retford United 3-1. Copestake struck in the 14th and 22nd minutes before Mark West got one back ten minutes later. There was drama at the end, Glapwell keeper Ross Etheridge saving an 89th minute penalty before Copestake completed his hat trick in stoppage time. Dinnington Town and Clay Cross clashed at Phoenix Park with the home side winning a close game 2-1 with goals from Andrzej Gordon-Hide and Brandon Ashmore, Tyrone Macaskill replying for the Millers. Crowle Colts had a welcome victory as they overcame Kiveton Miners Welfare 2-0 the scorers Ryan Bonser and Josh Fawcett. Dearne & District got the better of AFC Bentley, winning 3-1 with Tom Davage, Nick Guest and Billy Smith all finding the net, Josh Bowkett scoring for Bentley. The reserve sides of Sheffield and Staveley met on Saturday, Staveley coming out on top 2-1. Zander Duhameau put them ahead in the 37th minute, the lead being held until five minutes from time when Jacques Etia levelled from the penalty spot only for Duhameau to snatch the winner in added time. Jaden Thackery notched a hat trick in St Joseph Rockware’s 4-0 defeat of winless Phoenix, the fourth being an own goal. The points were shared at Manor Way, Collingham taking a 14th minute lead against Askern Miners through Adam Hillary, the home side equalising five minutes from time, Bruno Holden with the goal.

One game only in Division One South with Castle Donington and Ripley Town taking a point each from a 2-2 draw, Archie Moore and Matt Greasely’s goals for the home side being cancelled out by Ripley’s Lewis Goddard and Shane Burrows.

Finally a win for PMG in round one of the Notts FA Senior Trophy. They beat Bingham Town Reserves 3-0, the scorers Musa Jawara, Kye Wilson and Noah Tesfalem.