The Weekly Roundup for April 30th

All the week's highlights from the penultimate week of the season

Two Cup competitions reached their climax this week. On Wednesday night the Abacus Lighting Floodlit Cup Final saw Sherwood Colliery Reserves face Retford United at Sheffield FC. Thomas Sharpe put Sherwood ahead in the 14th minute, Ethan Weisztort doubling the lead with an hour played. Retford exerted strong pressure in the last twenty minutes but had only a 73rd minute Mark West penalty to show for it.
The following night saw Blidworth Welfare stage the final of the Macron Store Nottingham Division One Cup between Derby Singh Brothers and Bakewell Town, both at the top of their respective divisions. Aaron Maund gave Bakewell the lead on 20 minutes, Singh Brothers equalising nine minutes later with a goal from Tirhys Davidson. The teams were then evenly matched until Bakewell’s Louis Davies launched a spectacular shot beyond the keeper in the final minute to 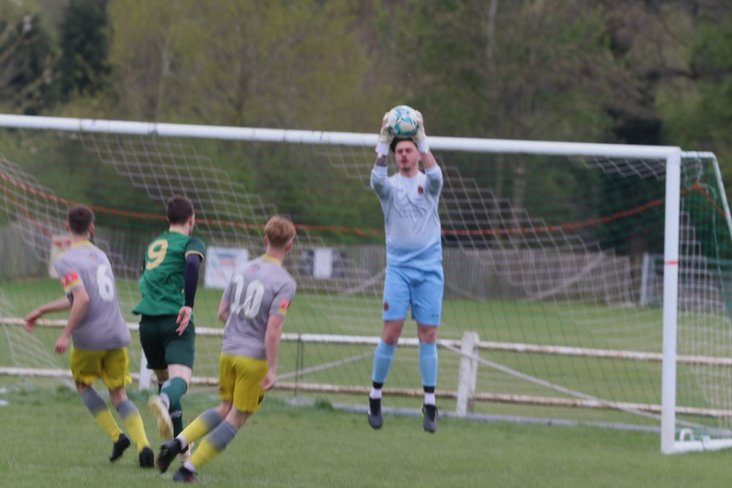 The race for the Premier North title lost one contender on Tuesday night as Clay Cross went down 4-1 at Harworth Colliery. The Millers took a 9th minute lead thanks to Lewis Macaskill which they held until three minutes before half time, Cory Goodwin with the goal. Harworth took the lead on 52 minutes through Sam Flower and sealed the win with strikes from Henry Alton and sub Alex Bartholomew, the visitors also missing a late penalty. Bentley scored in the final minute to take a point at SJR Worksop in a 2-2 draw. Jaden Thackery scored twice for the home side, Zack King’s 75th minute penalty and Danny Halliday’s late leveller meaning the points were shared. Sheffield Reserves were 4-1 winners at bottom of the table AFC Phoenix, Brandon Murrillo opened the scoring, Jamie Bonsor getting number two before the interval. Demitrius Timms added two in the second half before Tom Sowdon converted the second of two penalties to put Phoenix on the scoreboard. Sutton Rovers finished their season with a 2-1 win at Dearne & District who led at half time with a Jordan Good goal. Sutton took the points with Leyton Beck and Josh Miernick scoring. Crowle Colts made the long trek to Glapwell, the journey worthwhile as they ran out 2-0 winners. Ryan Bonser gave them a 3rd minute lead, sub Lewis Walker getting the second with 71 minutes played.

A busy Wednesday night in the Premier South Division with five games played. Mickleover Reserves were confirmed as runners-up after a 2-0 win at Wirksworth Ivanhoe, the goals coming from a 38th minute penalty from Danny Atwal and Kai Moore six minutes from time. Hilton Harriers, who finished with nine men, pulled off a creditable 2-2 draw against in-form Mickleover RBL. Scott Abbey out Hilton ahead in the first half before Liam Oliver and Jordan Lee turned the game round, Jack Thatcher earning a point for Hilton fifteen minutes from time. Teversal Reserves ended a difficult season with a 3-1 win at Rowsley 86 with Charlie Smith scoring twice and Tyreke Martin getting the other, Andy Roome netting a penalty for Rowsley. The other two matches ended in 1-1 draws, Elliott Nunn with the goal for Mansfield Hosiery Mills against Ashland Rovers for whom Callum Phillips got the goal. The points were also shared at South Normanton, Henry Brooks their scorer while Joel Cain replied for Holbrook St Michaels.

In Division One Central a Scott Taylor goal was enough to give Cromford & Wirksworth Town the points at home to Kilburn.

Following today’s games there are now just two teams left in the race for the Premier North title, Newark Town and Thorne Colliery. Newark beat ten man Harworth Colliery 3-0. Ainsley Finney scored against his former club with a 10th minute penalty, Lewis Chambers adding a second on 56 minutes. Ben Richards rounding off the scoring with 77 played. Thorne were 2-0 winners at Sheffield Reserves with Shay Evans-Booth putting the in front on 11 minutes, Cameron Johnson securing the win after 64 minutes. Newark now need one point from their final match to take the title. Dearne & District won 5-1 at SJR Worksop with Alex Lill scoring a hat trick, Matt Thornton and Jack Arundell also finding the net., Jaden Thackery getting SJR’s goal. Glapwell recorded a 5-0 win to end a miserable season for AFC Phoenix, Ben Copestake getting a hat trick, Ritchie Matthews with the other two. Kiveton Miners Welfare got a late equaliser at AFC Bentley, Kieran Gallagher striking from 25 yards three minutes from time to wipe out Theo Mowatt’s 7th minute goal for Bentley.

A disappointing end to the season for Pinxton continued as they fell to a 3-1 defeat at runners up Mickleover Reserves whose scorers were George Atwal, Fin Barker and Ben Horleston. Long Eaton Community beat South Normanton Athletic 4-1. Klein Gwenero hit a hat trick, Alans Voskresenskis with the other goal while Connor Mogford pulled one back for the Shiners. The other three matches finished all square. Champions Blidworth Welfare drew 1-1 at Holbrook St Michaels, whose goal came from Jorge Knowles, Alex Neilaon replying for Blidworth. Rowsley 86 and Hilton Harriers played out a goalless draw as did Wirksworth Ivanhoe and Ashland Rovers. Obviously the Peak District wasn’t the place for goals.
Harworth Colliery Reserves won the “winner takes all” match in Division One North, beating local rivals Bessacarr to take the league title, the reliable Michael Wibberley with the only goal of the game.

In Division One South Castle Donington were 2-1 winners against Linby Colliery, Isaac Nkrumah and Jordan Davies the scorers.