The Weekly Roundup for May 15th 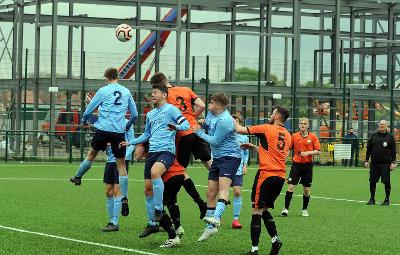 Thanks to John Mushet for the picture from Newark Town Development v Harworth Colliery Reserves this afternoon.

The fifth round of matches in the Chairman’s Cup saw most of the qualifiers for the knockout part of the competition confirmed. Crowle Colts top Group One after a 3-0 win at AFC Phoenix. Kurt Robinson opened the scoring after 28 minutes, with the other two goals coming within a minute of each other midway through the second half courtesy of Danny Barrowcliffe and Josh Fawcett. Group Two saw another 3-0 away win, this time by Dinnington Town in their game at Retford United. Jordan Turner put Dinnington in front on 19 minutes with Brandon Whitfield doubling the advantage with 53 played. Turner’s second, a penalty three minutes from time, completed the win. An eventful match at Clay Cross saw the home side suffer a rare defeat, as a late comeback gave Nottingham a 3-2 victory, a result which puts both teams into the quarter finals. Josh Parfitt struck in the 8th minute to put the Millers ahead. Josh Scully added a second with a 56th minute penalty but picked up a red card a minute later. Mitchell Tait reduced the arrears with another penalty on the hour. Clay Cross were reduced to nine men by injuries by the 78th minute, Nottingham taking full advantage with goals from Kane Williamson (81) and Mustapha Leone (87) to secure what had looked to be an unlikely win. In Group Four Rowsley had a 2-1 win against Mickleover Reserves, a result which also puts both teams in the next phase. Scorers for Rowsley were Joe Kay and Ryan Gackowski with Larrel King replying for the visitors.

Sheffield lost their unbeaten record in Division One North, going down 2-1 at home to Glapwell. Charles Bradwell put the visitors ahead on 25 minutes but Matt Beck equalised just two minutes later. The decisive goal came from Cory Burton a minute before half time. Ollerton Town are still seeking their first win as they lost narrowly to 780 JLC. Tomi Abere and Ben Walker scored for Ollerton but two from Joel Chapman and one for Cameron Barrows completed a 3-2 win for the visitors. Newark Town saw off a determined challenge from Bessacarr as they ran out 4-2 winners at the YMCA Activity Village. Lewis Poole put Newark ahead on 9 minutes but the home side were behind by the half hour , Daniel Taylor and Tom McLaughlin both finding the net. Emmanuel Barbosa equalised on 34 minutes, Tyler Martin adding two in the second half to clinch the points.

Kilburn went down 4-1 at home to Bakewell Town for whom Alex Moth scored a hat trick, Louis Davies also on target, Chris Ward with the goal for Kilburn.

The final line up for the quarter finals of the Chairman’s Cup was resolved this afternoon. AFC Bentley defeated AFC Phoenix 3-0 to finish in second place in Group One with goals from Brad Sykes (5 minutes), Liam Carrick (33) Shaun Carrington (64) and will travel to Rowsley 86. Group Winners Crowle Colts are at home to Nottingham. Dinnington Town top Group Two after a narrow 2-! win at home to Newark Town. Jordan Turner scored his second double of the week to win the game for the hosts with Mitch Griffiths getting the goal for Newark. Dinnington now welcome Mickleover Reserves, while runners up Retford united travel to Clay Cross Town. Nottingham secured second spot in Group Three with a 3-0 win over Underwood Villa, the goals coming from Elie Muendakani Tshilumba, Kallum Richards and Josiah Brown. Finally an upturn in form saw Holbrook St Michaels get the better of Mickleover reserves 3-2 thanks to goals from Josh Barnes, Ben Cartwright and William Welch. Surf Tefera and Devon Smith replied for Mickleover.

Unluckiest player of the day has to be Bessacarr’s James Bytheway who scored all five of his team’s goals only to see his team concede six to opponents 780 JLC. Alex Bradbury scored twice for JLC with the other goals shared between Brad Teale, Joe Rhodes, Nathan Watson and Oliver Buttrick. Glapwell also scored six as they beat Thorne Colliery 6-0 at Hall Corner. On the scoresheet for Glapwell were Charles Bradwell, who hit a hat trick, Grant Mitchell, Stephan Brown and Curtis Birchall. Yet another six goal tally came the way of Harworth Colliery who outplayed hosts Newark Town . Stand in keeper Marley Alder scored twice from the penalty spot with Michael Wibberley extending his scoring run to six games with a deflected effort and Tom Collier, Bayley Lowe and Jack Billau also hitting the net. Ollerton Town still seek their first win after going down 3-1 to top of the table Sheffield FC. Fynn Hamnett was their scorer, Sheffield picking up the points thanks to Max Rhodes, Jacques Etia and Alex Wonham.

In Division One Central Bakewell stay top with a 2-0 win against Holbrook St Michaels, the scorers here Aaron Maund and Rob Littlewood. Wirksworth Ivanhoe squeezed past Ashland Rovers 3-2 at Kingsway Park, a result that keeps them hot on Bakewell’s heels. Lucas Brough, Ryan Marchington and Jack Higton scored for Ivanhoe with Reece Burrows and a Ben Jones spot kick accounting for Ashland’s reply. Cromford and Wirksworth Town concluded a disappointing week for Kilburn, the final score at Cromford Meadows 5-0. Ryan Smith put the home side ahead on the stroke of half time before Sam Smith made it two and Dec Jenkins hit a second half hat trick.

Congratulations to the season’s first trophy winners Long Eaton United Community who are Division One South champions following a 3-0 win at Clifton All Whites. Long Eaton kept their perfect record going with two goals from James Gale and one for Andrew Tsolakis. After a run of three defeats Melbourne Dynamo returned to form with a bang with a 6-0 defeat of PMG. A hat trick here for Matt Brian with James Smith, Carl Alsop and Matt Savage completing the half dozen. Finally Selston travelled to Ripley Town and returned with a 3-1 scoreline in their favour. Jake Wright, Connor Towes and Jake Payling were Selston’s matchwinners with Alex Crossley scoring for Ripley.

The Saturday Roundup for May 8th  All the league and cup action from the past week.