The Weekly Roundup for May 22nd 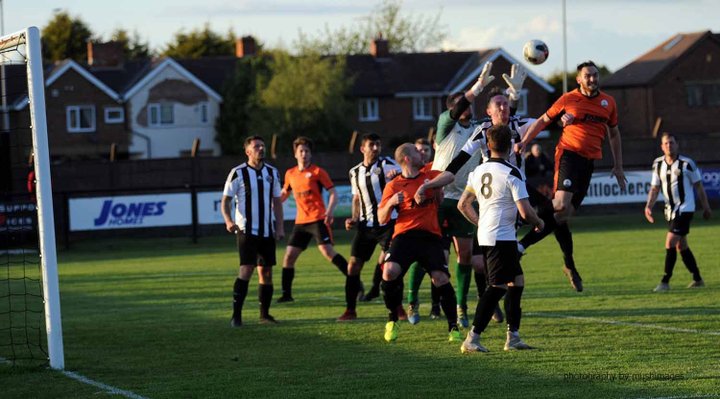 Thanks again to John Mushett for the photo from Harworth Colliery's midweek game against Glapwell.

The Chairman’s Cup reached the semi final stage in midweek with the ties spread over four evenings. Crowle Colts edged through 2-1 against visitors Nottingham thanks to a Richie Burdett double. Burdett struck in the 25th and 67th minutes and although Elie Muendakani Tshilumba pulled one back, Crowle held on to book a place in the semis. Mickleover Reserves proved too hot for Dinnington Town, the DerJosh Satchwell their matchwinners. A severely depleted Clay Cross Town suffered a rare defeat as Retford United took full advantage to inflict a 2-1 defeat on the Millers. The home side went ahead on 24 minutes through Jordan Hendley but the Badgers took the tie with goals from Sam Foulds (61 minutes) and Stuart Ludlam ten minutes from time. Rowsley 86 completed the semi final lineup with a 3-1 defeat of AFC Bentley. Rowsley’s scorers were Andrew Roone, Shomari Doyle and Daniel Gilbride, Bentley replying with a Joe Smith goal.

In Division One North Ollerton Town finally got a win under their belts with a 2-1 defeat of Thorne Colliery, Liam Mays and Jake Brace the men on target with Curtis Mann getting Thorne’s goal. The two form teams both added three points to their tallies. Sheffield Club were 3-0 winners over Bessacarr, Max Rhodes put the home side ahead on 38 minutes, Jacques Etia getting the second four minutes later and another on the hour. Glapwell stayed hot on their heels travelling to Harworth Colliery and returning with a 2-1 win. Mick Wibberley scored his customary goal on 9 minutes for Harworth, Cory Burton equalising with 15 played. The second half was end to end, the decisive action coming on 73 minutes when Charles Bradwell scored from the spot to clinch it for Glapwell.

Holbrook St Michaels and Kilburn finished all square at 2-2 in Division One Central, John Cluskey and Kyle Curzon’s goals for Holbrook being countered by a Jordan Mighty double for Kilburn.

Goals were at a premium in the two Chairman’s Cup semi-finals this afternoon. In the Cup proper, a first minute goal by Steve McDonnell separated Retford United from Crowle Colts, Retford will now play the winners of Rowsley 86 and Mickleover Reserves who meet on Monday night. In the Plate semi-final a Ben Cartwright goal proved enough for Holbrook St Michael to book a final slot against AFC Phoenix who were gifted a walkover after Newark Town withdrew from the competition.

Sheffield FC continued their fine run of form in Division One North with a 6-2 win against Harworth Colliery. Matt Beck put the home side in front after 20 minutes, Charlie Baird equalised, but Jacques Etia restored the lead before the interval. Benni Ndlovu put Sheffield further ahead with goals on 47 and 55 minutes, Alex Wonham and Etia with his second putting the result in no doubt before Bayley Lowe grabbed a consolation for Harworth five minutes from time. Ollerton Town made it two wins in three days as they beat Newark Town 3-1 thanks to goals from Oli Jordan, Jordan Roberts and Kyle Clarkson, Mitch Gorman scoring for Newark. 780 JLC and Thorne Colliery shared the points and six goals in a 3-3 draw. Scorers here were Tom Garner, Josh Law and Nathan Watson for 780 and Brad Heaps, with two, and Keenan Simpson for Thorne.

Bakewell Town and Wirksworth Ivanhoe both took maximum points from their games as they battle it out at the top of Division One Central. Bakewell had a 4-0 win at Woodhouse Colts, Louis Roach hitting a hat trick and Joe Poste with the other one, while Wirksworth also won away, 3-0 at Kilburn, Kyle Higton, Dan Watson and an own goal securing the points.

Long Eaton United Community are one win away from a perfect season. They made it eleven wins on the bounce, defeating PMG Academy 2-0 thanks to Ryan Bache and Marley Fearon. Melbourne Dynamo made sure of the runners-up spot with a 3-1 victory at Ripley Town. Two goals here for Jack Goodband and one for Jack Bodill, with Tom Holmes scoring for Ripley.

 The Weekly Roundup for May 29th All the news from the week's league and cup matches in the Central Midlands.