The Weekly Roundup for May 29th 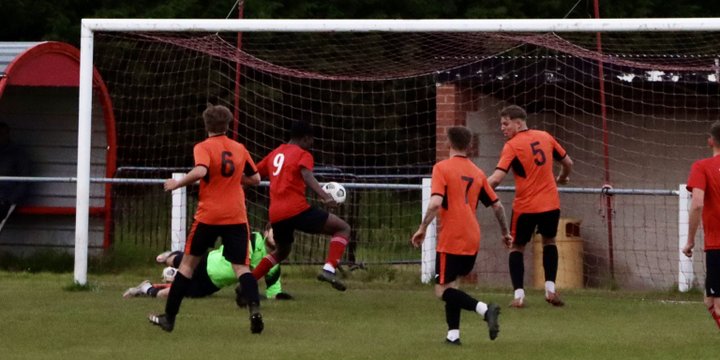 All the news from the week's league and cup matches in the Central Midlands.

Congratulations to Sheffield FC Reserves who are worthy winners of Division One North. The title was confirmed after a 4-0 victory over Newark Town on Wednesday evening. The sides were separated at the break by Ben Harriot’s goal in the last minute of the half, Alex Wonham scoring from the penalty spot three minutes into the second period goals in the final eight minutes from Jamie Yates and Jacques Etia setting the seal on a highly successful season. Glapwell will finish runners up, they drew 1-1 at Bessacarr, Josh Leonhardt ensuring a share of the points after Beau Bailey had put Bessacarr in front. Ollerton Town’s late season revival continued as they played out a 2-2 draw with Harworth Colliery. Billy Fletcher and Tomi Abere got the goals for Ollerton with Charlie Baird’s double getting a point for the visitors.

With The titles decided in the north and south, attention turns to the Central Division. This is now a two horse race with Wirksworth Ivanhoe needing to win their final two matches to make sure of top spot ahead of rivals Bakewell Town. Bakewell, needing a win against Cromford and Wirksworth Town to hold on to their advantage, could only manage a 2-2 draw. Rob Littlewood and Jamie Carrington gave Bakewell a healthy looking half time advantage, but a brace of Dec Jenkins goals, the first from the penalty spot, the second a shot from distance ensured a point apiece. Joy at Ashland Rovers as they finally got a win in their last game of the season. Their victims were Holbrook St Michaels, the final score 2-1. Scorers of the all-important goals were Danny Bircumshaw and Connor Barnes with Will Welch getting one for Holbrook. Woodhouse Colts beat Kilburn by the odd goal in seven at the Clod on Tuesday. Liam Theakstone scored twice for Woodhouse with Jayden Bull and Baillie Hajman adding one each with Kilburn’s reply coming from Jordan Mighty (2) and Jordan Patten.

The Final of the Chairman’s Shield competition was a close affair, AFC Phoenix and Holbrook St Michaels finishing all square at 1-1, Rueben Nwadike’s strike on 35 minutes being cancelled out by an Adam Houghton’s 75th minute equaliser. The resulting penalty shootout went the way of Phoenix, who had keeper Joe Taylor to thank as he saved Holbrook’s seventh spot kick to leave the Yorkshire club 7-6 winners.

Division One champions Sheffield FC remained undefeated, winning their final match 4-2 at Thorne Colliery. Alex Wonham with a hat trick and Benni Ndlovu set the seal on a successful season with Thorne’s goals coming from Shay Evans-Booth and Andy Walkden. Another hat trick hero was 780 JLC’s Joel Chapman, whose goals helped his side come from two down at Newark Town. Town had gone two up in the first nine minutes, Tom Perkins and Alex Roberts the scorers, but Chapman struck in the 28th, 61st and 90th minutes to give his side the points.

The Central Division title will not be decided until Wednesday evening, both Bakewell Town and Wirksworth Ivanhoe getting the wins to ensure the contest goes right to the wire. Bakewell were 3-0 winners against Kilburn, Freddie Hatcher, Joe Poste and Stu Baker getting the goals. Wirksworth kept up the pressure, a 95th minute winner seeing them edge past Woodhouse Colts 3-2. Two Kyle Higton goals and an own goal did the trick for Ivanhoe, Ryan Clarke scoring both for Woodhouse.

Winners of Division One South, Long Eaton Community made it a 100% season as they beat nearest rivals Melbourne Dynamo 2-0 at Grange Park with Tom Marshall and Josh Lawe getting the goals. PMG Academy ended the season in style, recording a 6-1 win at Selston, the goals coming from Daniel Adiefeh with two, Charles Opoku, Alex Bamba, Morgan Wallace and Noah Tesfalem. Ripley Town changed places with Clifton All Whites at the foot of the table as they won 3-2 with Ryan Cumberland, Michael Dunne and Adam Busuttil all finding the net.

 The Final Roundup - June 5th A roundup of the final matches of the Central Midlands League season.