The Weekly Roundup for October 9th 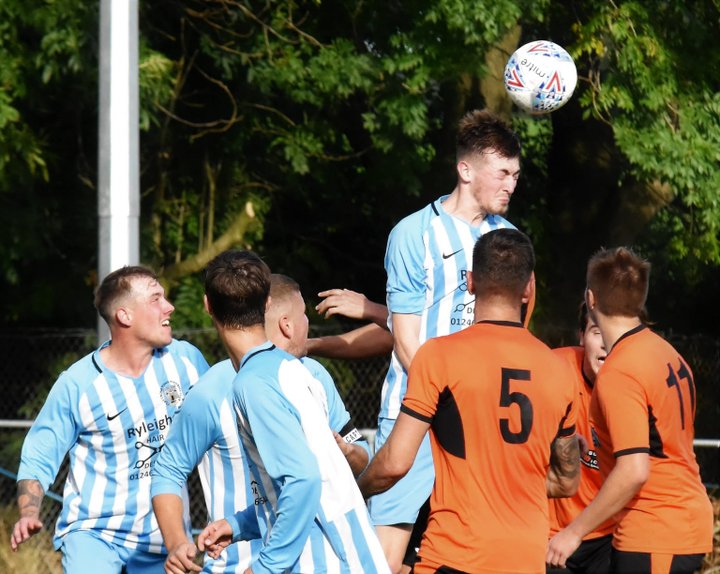 All the news from the week's matches in the Central Midlands

Thanks to DC Live Photography for the picture from Today's match between Clay Cross and Harworth Colliery.

The first round of the Abacus Lighting Floodlit Cup accounted for the bulk of the midweek games with six of the nine scheduled ties going ahead. On Tuesday night, Blidworth Welfare had a comfortable 5-0 win against Collingham. Alex Neilson put them ahead on 34 minutes to give them a half time lead, Chris Neilson put Blidworth further in front on 52 minutes with Jacob Pearce getting a third ten minutes later. Two late goals from sub Adie Harris completed the scoring. Dinnington Town were pushed all the way by South Normanton Athletic before coming out on top 2-1. Ash Kelly and Jake Thompson were on target for Dinnington, Henry Brooks pulling one back four minutes from time. Two reserve sides met at Mickleover with Staveley advancing into round two following a convincing 5-0 win. Dustyn Grierson struck twice in the first half, Aaron Pride adding to the score on 54 and 60 minutes with Reece Clegg rounding things off in the 65th minute. It was a close run thing at Sheffield FC where Pinxton won by the odd goal in seven. Sian Green put the visitors two up in 23 minutes, Max Rhodes reducing the arrears two minutes before the break only for Brad Foley to get number three in the last minute of the half. Ethan Wilkinson made it 3-2 on 46 minutes before Green completed his hat trick, Rhodes getting the final goal five minutes from time. Ollerton Town Reserves came very close to causing a minor upset, losing on penalties after playing out a 2-2 draw with Arnold Town. Marshall Smith gave Arnold the lead before George Slack equalised. Kian Leavesley put Arnold back in front, Slack again levelling the scores. Both sides had chances to put the tie to bed before the tie went to penalties which Arnold edging home 5-4. No such tension at Retford United where the home side predictably beat Carlton Town B 6-1. The match was effectively settled after 20 minutes by which time Igor Mlynarski, Aaron Fell and Mark West had put the home side three up. Harrison Haynes-France got one back for Carlton but Fell and Dean Conway made it 5-1 by half time, Lee Thompson getting the only goal of the second half.

In the Premier North division Askern Miners drew 1-1 with St Josephs Rockware, Max Sykes’ goal for the visitors with Bailey May equalising for Askern.

The weekend’s matches began in the Premier South division, Blidworth Welfare returning to the top of the league on Friday night after a 2-0 win at South Normanton. After a goalless first half goals from Matty Toseland on 62 minutes and Caolan Dobney four minutes from time settled the game. Mickleover Reserves could have reclaimed top spot the following afternoon but went down 4-1 at Linby Colliery for whom Ash Foster opened the scoring on 9 minutes before Sean Craven and Foster again made it three by half time. Jacob Edge-Lucas pulled a goal back on 70 minutes but Jack Allen netted number four for Linby five minutes from the end. Pinxton kept up their goalscoring form with an 8-1 hammering of Teversal Reserves. Rob Fretwell led the way with four goals, Kieran Debrouwer ran in a hat trick and there was one for Joel Smith. Mickleover RBL are in third place, they had a 3-0 win against Nottingham FC Jordan Lee scoring all three. Rowsley 86 beat Sherwood Colliery Reserves 5-2 with Ligan Toplis and Jack Stephenson getting two apiece and Andrew Roome also finding the net. Sherwood’s scorers were George Camps and Charlie Hardwick. Goals at either end of the game gave Hilton Harriers a 2-1 win over Ashland Rovers. Max Bulmer put them ahead after just two minutes, Ben Jones equalised with a 59th minute penalty before Jordan Mason nicked the points for Hilton with two minutes left to play. Wirksworth Ivanhoe edged past Arnold Town 3-2 with Tom Mellor, Ryan Marchington and Lucas Brough the scorers, Arnold replying through Kian Leavesley and a Tony Law penalty.

There were some close run things in the Premier North division, none closer than at Collingham wher the home side led Retford United by two goals with seven minutes to go before conceding twice to go down 4-3. Danny Abdulla got the 88th minute winner to snatch the points, Mark West (2) and Tom Brook also among the goals for Retford, with Will Hollingsworth getting two for the home side, Drew Allwood also on target. Clay Cross and Harworth Colliery shared six goals but this time it was the home side who had to come from behind. Lee Edmondson and Bayley Lowe put Harworth to up in the first 14 minutes, Grant Mitchell getting one back in the 24th minute. Josh Parfitt And Lewis Macaskill got the Millers in front midway through the second half before Ash McEwan, ensured the points were shared. AFC Bentley stayed in the leading group with a 3-1 defeat of Crowle Colts. Joe Smith got Bentley’s opener in the 16th minute, Neil Johnstone doubling the lead with an hour played. Ryan Bonser scored for Crowle on 72 minutes but Devan Hannan restored the lead a minute later. The top two sides both won away from home. Thorne Colliery remain a point clear at the top as a hat trick from Josh Gelder and one each for Morgan Brown and Evan Fortune-West gave them a 5-1 win at Kiveton Miners Welfare for whom Warwick Wood was the scorer. A Lewis Chambers double and goals for Elliot Burrell and Mark Faflik helped Newark Town to a 4-2 win at Staveley Reserves, whose scorers were Danny Fullwood with a penalty and Reece Clegg. Dearne & District edged out St Josephs Rockware 3-2 at the Kingsmark Stadium with Mick Guest scoring twice and Dan Guest once, St Josephs goals coming from Matty Templeton and Tom Mullen. In a game of few chances Sutton Rovers and Glapwell played out a goalless draw, only the third in the two top divisions this season.

In the Macron Store Nottingham Division One North Newark Town picked up their first points of the season with a 5-2 defeat of Ollerton Town, Christopher Arundell scoring four and James Martin with the other one. Olly Bradbury also scored four for 780 JLC in their 6-1 win against Dearne & District with Nathan Smith and Joe Rhodes also on target. Kai Thomas (2) and Kieran Atkin were Bottesford Town’s match winners as they beat Retford FC 3-0.

Bakewell Town scored seven for the second successive Saturday in Division One Central, this time their victims were Kilburn. Alex Moth got four, Jamie Carrington two and there was also an own goal, Matty Smith getting a consolation for Kilburn. Scott Taylor scored twice in Cromford & Wirksworth Town’s 3-0 defeat of South Normanton Athletic, Aaron Taylor also on the scoresheet. Holbrook St Michaels had a 2-0 home win against Woodhouse Colts with Chris Whitehead and Owen Gorman the scorers.

Harworth Colliery departed the Sheffield and Hallamshire FA Association Cup going down 6-1 at Holmbridge, Michael Wibberley with the Harworth Goal.