The Weekly Roundup for September 18th 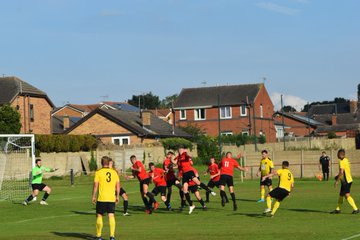 All the action from the week's games in the Central Midlands

There were half a dozen midweek games, two each in the North and South divisions and two Sheffield Senior Cup ties. In the north division Dinnington Town extended their winning run to six beating St Josephs Rockware 3-0 at Phoenix Park with goals from Jordan Turner, Liam Bryan and Danny Cain. Collingham were two goals to the good in just 12 minutes in their match with Glapwell, Jo Jo Bilton and Will Hollingworth giving them the perfect start. However that was as good as it got as Tom Moore and Solly Limb levelling by half-time before two goals from Owen Ryan, a second for Moore and one from Daniel Cipco rounded off a 6-2 win for Glapwell.

In the south division Arnold Town came close to gaining their first point of the season but an 85th minute goal ffom Holbrook St Michaels’ Dylan Garnett means They fell to a 2-1 defeat. Ben Cartwright had given Holbrook a 7th minute lead, Tony Law equalising for Arnold on the hour. South Normanton Athletic are also seeking their first win, they lost 2-0 at home to Teversal Reserves. The goals came late, Joe Geeson scoring in the 75th minute and Lee Naughton getting the second in the last minute.

The league’s interest in the Sheffield & Hallamshire Senior Cup ended as our two remaining sides were narrowly beaten by Step 6 opponents. Harworth Colliery went down 2-1 to Athersley Recreation, Tom Bedford with the Harworth goal, while AFC Bentley took the lead at Parkgate with a Theo Mowatt penalty but again went down 2-1.

The Premier North division was certainly the place for goals, the six matches producing no less than 43 goals. Top scorers were Harworth Colliery, who after going a goal behind to Askern Miners’ Joel Tomlinson, produced nine of their own. Tom Bedford hit a hat trick, Ainsley Finney added two and there were also goals for Bayley Lowe, Sam Flowers and Aaron Pickersgill with a late own goal completing the scoring. The game between Glapwell and Dearne & District kicked off late due to heavy traffic, but the spectators’ patience was fully rewarded as they saw the visitors come out on top 6-5, the winning goal coming four minutes from time. Dearne’s hero was Nicholas Guest who scored four with Nathan Lovell and Billy Smith also finding the net. Ben Copestake got a hat trick for Glapwell whose other goals came from Solly Limb and Steph Brown. St Josephs Rockware and Sheffield Reserves shared eight goals with St Josephs scoring twice in the last three minutes to take a point. For Sheffield Jordan Walshaw and Max Rhodes both scored twice while Jaden Thackery’s brace for the home side was added to by Taylor Thackery and Ben Brown. AFC Bentley won 5-1 at Collingham, the scorers here were Josh Bowkett with two, Theo Mowatt, Zack King and Joe Smith with Will Hollingsworth getting one for the hosts. Dinnington Town dropped their first points of the season as they drew 2-2 at Kiveton Miners Welfare. Joe Byron and Liam Bryan got the goals for Dinnington but an Elliott Fox double gained a noteworthy point for the home side. Newark Town made it seven successive wins with a 4-0 victory at Sutton Rovers. Jonny Wiles put them ahead on 17 minutes, Lewis Chambers doubling the score with 52 played. Sutton were then reduced to ten men , Newark adding further goals from Mark Faflik (62 minutes) and Rhys Lewis (79)

Pride of place in the Premier South division goes to Arnold Town, who, after six straight defeats, raised their game to beat Teversal Reserves 5-0 at Eagle Valley. Scorers for Arnold were Raheem Suban with two, Jamie Measor, Tony Law and Kiam Cunningham. Blidworth Welfare remain unbeaten following a 5-1 defeat of Rowsley 86 thanks to Tristan Burrell’s hat trick and goals from Alex Neilson and Adie Harris, with James Nugent pulling one back for Rowsley. A Jay Cooper hat trick couldn’t prevent another draw for Pinxton, their sixth in eight games, the match at Wirksworth Ivanhoe finishing 3-3 with Lucas Brough (2) and Kyle Higton on the scoresheet for Wirksworth. Long Eaton Community rose to second in the table, They fell behind to a 4th minute goal from Hilton Harriers’ Niall Dawkins, but two in two minutes early in the second half from Klein Gwenero and a 75th minute goal by Hugo Broughton gave Long Eaton maximun points. Mickleover RBL hit Mansfield Hosiery Mills for Six at the Fieldings with two goals from Jordan Lee and Sam Vickers and one each for Dean Oliver and Mason Booth-Davies. The points were shared at Holbrook St Michaels as they drew 2-2 with South Normanton Athletic. Ben Cartwright got both for Holbrook with Owen Nixon and Elliott Bland on target for the Shiners.

Bakewell Town surrendered their 100% record in Division One Central as they went down 2-0 at home to Woodhouse Colts, the goals coming from Jayden Bull and Jamie Royle. Cromford & Wirksworth Town beat Blidworth Welfare 4-1 Matt Wilkinson (2), Scott Taylor and Sam Smith with the goals, Foston Barnes getting one for Blidworth. Kilburn inflicted more pain on Mansfield Hosiery Mills, Isaac Anthony-Raymond and Jordan Mighty both hitting hat tricks in a 7-0 win with Stu Birkett also on target.

Derby Singh Brothers stay top of Division One South after a 3-1 defeat of PMG Academy. Khaleeq Shafique, L’varn Brady and Tirhys Davison with the goals, PMG’s reply coming from Ebrima Kuyateh. Castle Donington recorded their secnd successive win as they beat Carlton Town 2-1 both goals coming from Rhys Brade. Heanor Town had a 2-0 win over Ballers with Bradley Austin scoring in the 32nd minute and Chester Norman getting the second on the stroke of half time.