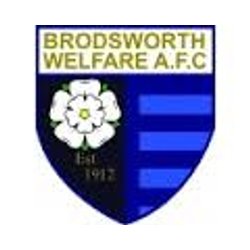 Although the club gives it’s official formation date as 1912, Brodsworth Main Colliery (as
they were first known) were actually founded two years earlier, entering the Sheffield
Association League for their inaugural campaign in 1910/11. They joined the Yorkshire
League in 1921 and won the title in 1924/25, but left the league in 1935.
After World War 2 the club returned to the league for a third spell. In 1950/51 they were
relegated to Division Two after finishing second from bottom of Division One. They
withdrew from the league at the end of the 1956/57 season. Two years later they were
renamed Brodsworth Miners Welfare.
In their first season under the new name the club finished fourth in Division Two and were promoted to Division One, but were relegated back again after just a single season. After finishing bottom of Division Two in 1972 the club was relegated to Division Three, where they remained until withdrawing in 1976.
Welfare played in the Doncaster Senior League throughout the 1980’s and won the league title in 1985. In 1988 they joined the Northern Counties East League (NCEL), entering Division Two. They were promoted to Division One when the league restructured in 1991 (despite finishing second bottom od Division Two) and floundered at the foot of the NCEL for several years, until winning promotion to the Premier League in 1999. In 2006 they were renamed Brodsworth Welfare, and despite finishing bottom again in 2007/07 they again avoided being demoted. They were finally relegated at the end of the 2009/10 season after again finishing bottom, and they resigned from the NCEL in the summer of 2011 after finishing bottom of Division One.
They played in the Doncaster & District Senior League for a year before joining the Central Midlands League North Division in 2012, but they re-joined the Doncaster competition in 2016 were they finished Runners-up in Division One and winning the Division One League Cup. And so this season 2017/18 sees them have teams in both the Central Midlands League and the Doncaster Rovers Senior League.
Best FA Cup performance came in the 1926/27 season seeing them reach the 4 th qualifying round and in the FA Vase twice reaching the 2 nd Round 1997/98 and 2008/09.

Most notable players who have turned out for Brodsworth are David Speedie formerly of
Chelsea, Liverpool and Scotland (10 Caps) and Danny Schofield, Huddersfield Town, Yeovil, Millwall and Rotherham.