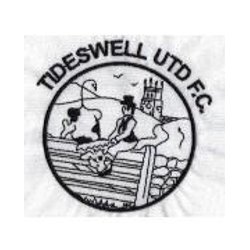 Tideswell Football Club has come a long way in the last 20 years. The old sloping pitch has gone, along with the shed like changing rooms, thanks to a £1M+grant from the National Lottery. In 2001 a crowd of several thousand Sheffield United supporters came to the inaugural match, played on a flat pitch under floodlights.
The club itself though is still a village football club with surely the best facilities in the area. Now is the time to take the club further. Dave Bradbury, son of former professional footballer Terry, came up through the ranks at TUFC and in recent years has been managing Buxton AFC under 19s under 21s and reserves. He has now taken on the role of Tideswell United FC manager as they move up to Step 7 Football in the Central Midlands (North) League.
Playing in this league will be different in a number of ways. To begin with spectators pay to watch. The entrance fee is only a few pounds, but club revenues go towards maintaining a higher standard of, well, everything. The league will set standards- match officials will be paid and overall conditions within the club will be assessed. The existing playing area and the pavilion are a great basis for this to be achieved.
One prerequisite for the bold new venture to succeed will be local involvement, not just on the field but also off it. People will be needed to sell teas food and other refreshments. There will be a matchday programme, which will contain ads for local shops and businesses also advertising boards around the pitch will be available.
After having a successful first season winning the fair play award twice we look forward to continued success on and off the field.